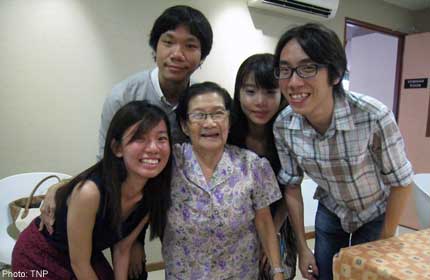 Food wastage is on the rise in Singapore, with the National Environment Agency recently reporting a record-high 703,200 tonnes of food wasted last year, which is a 26 per cent rise since 2007.

But some students are aiming to reduce this wastage. On July 14, they will hold a one-off food rationing exercise to benefit 335 needy households in Lengkok Bahru, a neighbourhood near Redhill.

Each household is given 40 points, which are recorded on a rations card, to “purchase” dry rations and toiletries.

The values of the items range from one to seven points. For instance, a packet of biscuits is worth two points and a bottle of shampoo, six points.

They pay rent ranging from $28 to $40 a month, depending on the number of rooms in their flat.

This rationing exercise will be a pilot run to allow them to choose their food rations, unlike previously, when various corporate organisations would pack rations in advance, resulting in wasted food.

Mr Tan said: “In the past, it was more like a takeit- or-leave-it situation. Some Muslims would receive luncheon meat.

“Diabetic patients would also not be able to eat some sweetened products. These residents would throw away the food given.”

Mr Chow said this event can reach out to more beneficiaries, thanks to the Central CDC’s Mayor’s Imagine Fund (MIF), which funds ground-up initiatives benefiting the community.

He said: “Our main funding comes from the MIF.

This allows us to cater for more of the residents.

When ad-hoc corporations provide rations, they sponsor only enough for 150 to 200 people.”

Mr Tan said that each of the 335 households is a registered member of the Silver Ace Senior Activity Centre in Lengkok Baru.

They only need to register to receive a ration card to redeem their rations.

Retiree Foong Ban Fatt, 73, said: “Last time, they just gave us Milo or biscuits. I cook for myself sometimes, so I like to choose my food items.”

Mr Tan said the students plan to conduct followup surveys with the beneficiaries and analyse the data collected to determine if this system is sustainable.