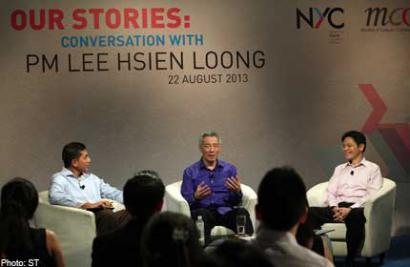 Being part of the National Youth Council’s (NYC) new volunteer youth corps – which the Council hopes will be 6,000-strong – is more than just signing up for community work.

Participants have to do both an overseas project and a local one.

And although they will be matched to critical local needs at the start, they will have to develop their own projects after doing research on the ground.

“We want the projects to be projects that meet the needs of the community, not just projects that you want to do,” said Acting Minister for Culture, Community and Youth (MCCY) Lawrence Wong on Thursday.

The volunteer youth corps was announced by Prime Minister Lee Hsien Loong on Sunday, in a move meant to urge more young people to do community work.

Though the eventual target is 6,000 volunteers each year, the pilot will involve just a few hundred when it starts early next year.

“We want to expand the opportunities for young people to serve, and to make that service a vehicle to meet critical community needs as well as national goals,” said Mr Wong. These could include caring for the elderly or fighting global warming, he added.

The youth corps, for those aged 15 to 35, is aimed mainly at students in the Institute of Technical Education, polytechnics and universities but is open to working adults. They will receive training and mentoring, funding for projects, networking opportunities and allowances if they want to take time out from their studies for full-time volunteering.

They can also get a “pay-it-forward” grant at the end of their youth corps time, which they can use to mentor new volunteers.

The overseas part of the programme will initially be via the Youth Expedition Project (YEP).

The YEP is chiefly for overseas projects, but it will eventually be subsumed and replaced by the youth corps programme, with its more substantial local component. “We don’t quite today have a good platform to facilitate community service projects within Singapore itself,” said Mr Wong.

The Ministry of Culture, Community and Youth (MCCY) will identify specific local organisations to work with volunteers and mentor them. They may also get funding to help build their mentoring capabilities.

The youth corps’ budget has not been decided, but it will tap the $100 million National Youth Fund announced in this year’s Budget. Over the next few months, MCCY and NYC will hold dialogues for young people and other community partners to work out further details.

ITE student Terence Koh’s project, designing mobility devices for the elderly, was held up on Thursday as an example of a local project with long-term impact – the sort MCCY wants to fund in the youth corps programme.

But the 19-year-old said he was unsure if he wanted to be part of the programme, given its overseas part. “I’d rather do it locally as I prefer to help those here.”