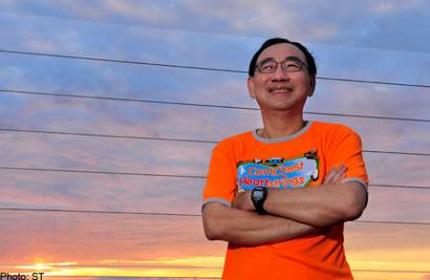 The Community Chest – a glamorous outfit which targets just the well-heeled to raise huge sums of money?

If that is the impression some people have of Singapore’s biggest fund-raiser in the social service sector, then it is time to change it, said ComChest’s new chairman Phillip Tan.

“I want to change this perception and get everyone from children to blue-collar workers involved and create a culture of caring and sharing beyond monetary donations,” said Mr Tan, who succeeded hotelier Jennie Chua who held the position for 14 years.

This strong belief that charity goes beyond money has long followed the 64-year-old semi-retiree, having learnt the importance of kindness from a young age, often from his father.

In an interview last Thursday, on the first day in his new job, he recalled how, in 1969, during Malaysia’s May 13 race riots, his father opened their home to his classmate’s family of eight.

“It was dangerous where they lived so my friend asked if they could stay with us. My dad, without as much as a second thought, said yes immediately,” said Mr Tan, who grew up in Kuala Lumpur.

“My friend and his family went on to stay with us for two months.”

And this is the type of neighbourliness he wants to spread through Singapore’s heartlands.

“It could even be volunteering to clean an elderly neighbour’s house once a month. In the long term, a friendship could develop, and help could be rendered to the elderly in his or her time of need.”

Mr Tan spoke with passion about his many plans for the fund-raising arm of the National Council of Social Service (NCSS), which last year raised a record $72.3 million for the 83 voluntary welfare groups under its umbrella.

He wants to roll out ComChest Carers, which will connect those who fall through the cracks with the relevant agencies, and provide temporary financial aid in emergencies – such as when a family loses a breadwinner.

He hopes to establish a system where rejected applications for funds are given a second chance.

“We have heard complaints that it is hard to get money from ComChest. We have been very judicial about allocating funds but I think we can afford to use the heart and look closer into cases that need help.”

But his first step is to reach out to children, and that is why he is breathing new life into ComChest’s pink mascot – Sharity Elephant, who first started his mission of sharing and caring in 1984. ”

Children are kings and queens of their families and they can influence and mobilise their parents into giving back as well,” said Mr Tan, who has three sons aged, 26, 36 and 40.

Already, a small publicity department has been set up at ComChest to reach out to schoolchildren and produce a Sharity Elephant magazine.

It was in 1975 when Mr Tan, who received his citizenship in the 1990s, moved to Singapore with his wife Lily and two bags. He joined a public accounting firm and was later made partner.

To make new friends, he joined Apex Club, a social service club, which kick-started his volunteer work with a food distribution programme for the needy and elderly in Redhill.

But for the most part, Mr Tan, who retired as a partner of PricewaterhouseCoopers in 2006, has had a relatively quiet profile, serving behind the scenes at NCSS since 1983, and as chairman of the fund management committee at Yellow Ribbon, which helps ex-offenders and their families.

Even when ComChest was looking for a successor to Ms Chua, he was initially part of the recruitment committee.

But it decided that Mr Tan, who is also vice-president of the NCSS board, was the best candidate for the job.

Said Mr Tan: “I’ve a strong desire to give back to Singapore, which has treated us well. I started with nothing but now I’ve much more than the two bags I carried over here.”