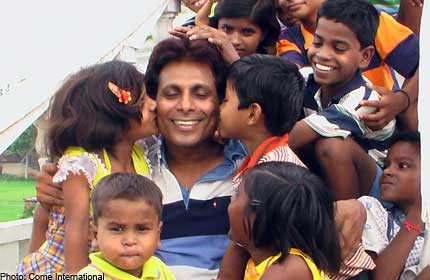 Most landlords rent out their flats to make money.

But not Singaporean Ravi Rai Manas, 51.

The $2,000 he collects monthly from his three-room flat in Clementi and donations that he gets help pay for five child shelters in India.

The money is also used for their medical fees, and provides vocational training courses and counselling services for another 400 children who drop by every year but do not live in Mr Rai’s shelters.

“There are moments where you just run out of money,” said Mr Rai, who founded Children Of Mother Earth (Come) in 1998, with his life savings of $300,000, which ran out four years later.

“In those times, I would call my friends in the US and UK for donations, and somehow it will work out in the end,” he said.

He enlists the help of volunteers from India and overseas to conduct classes.

Mr Rai spoke to The New Paper at an exhibition at The Foothills in Fort Canning Park to spread awareness of Come’s child shelters.

The free exhibition ends this Sunday.

When Mr Rai was a child, his father, Mr Ram Awadh Rai, would often take the family to their ancestral home in Pharsar, a village on the outskirts of Gorakhpur, in the Indian state of Uttar Pradesh.

There, Mr Rai saw children of his age living in abject poverty.

The sight of children dressed in dirty rags begging for food and money sparked his resolve to help them one day, when he had the means to do so.

That finally happened in 1998, when he quit his civil engineering job of 13 years. He had been earning about $5,000 a month.

He set up the first shelter in Pharsar in 1998, taking in 25 children he found wandering the streets.

Mr Rai, who is single, said: “These kids came from the lower castes of society and never received any form of education.

“Most are orphans, some were abandoned by their parents due to poverty, but almost all of them were criminals of some sort, dealing with drugs and joining gangs.”

But he realised they were only a drop in an ocean of destitute vagrants. He began going to the railway station, where many homeless children choose to live, to spread the word about his shelter.

“They prefer to be outside. These children want the freedom to commit crime, to use drugs,” he said.

Eventually, his efforts were noticed by Mr J. P. Batra, then railway manager of Indian Railways.

Impressed by Mr Rai’s work, Mr Batra allowed him the use of three under-utilised Indian Railways buildings. Mr Rai used those buildings in Lucknow, Delhi and Gorakhpur to house more children. Today, he has about 200 children under his care. Donations and volunteers keep his work alive.

“If you do something meaningful, and with the right intentions, people will come to you offering their help or their money,” Mr Rai said.

The children receive free medical help, basic education and trauma counselling to help them move on with life when they grow up.

His younger brother, Mr Shashi Rai, 47, said that Mr Rai’s personal mission has been apparent since they were young.

“He has always been a kind, sensitive man and we all kind of expected it,” said Mr Shashi Rai, who helps his brother run the Singapore chapter of Come. Mr Rai has two brothers and five sisters.

The most important person he had to convince of his plan was his father, who was expecting him to get married.

“So one day I summoned all my courage and told him I didn’t want to get married, that I wanted to do this. He stood up, hugged me tightly and whispered ‘I’m really proud of you’,” said Mr Rai.

His father died in 1997 and the ancestral Pharsar house became the first shelter.