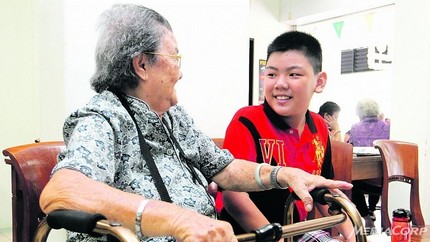 The Fengshan Primary School student prefers to spend his time chatting with seniors because Facebook games like Farmville are “boring”, said the youngest volunteer in this year’s President’s Challenge Volunteer Drive (PCVD), an annual event that promotes helping as a way of life.

At the centre, Yun Shan helps conduct surveys and distribute water bottles to the seniors before their morning exercises. He sometimes takes them on at Rummy-O, a tile-based game for two to four players.

“They will always beat me, though,” he admitted.

Dedicating his time to helping others is not something new to Yun Shan. Indeed, he started volunteering when he was only nine years old, playing the role of a “little teacher” at kidsREAD, a nation-wide reading programme for children aged four to eight.

Two years ago, after his mother took him on his first house visit to deliver food packets to flats in Bedok, Yun Shan decided to volunteer with seniors. “I thought, if my mother can do it, I can do it too.”

He started with monthly visits, which turned into weekly visits as he felt a sense of accomplishment each time he helped others.

This year, the PCVD introduced volunteer training courses to equip volunteers like Yun Shan with skills such as the safe handling of the elderly, how to communicate better through simple, conversational dialect, and befriending.

The hope is that these skills will make the volunteer experience more meaningful and to better match volunteers’ expertise to the needs of the voluntary welfare organisations.

In June, Yun Shan joined 17 other volunteers – who were mostly aged 60 and over – in a workshop on how to be an effective volunteer.

Taught by a trainer from RSVP Singapore – The Organisation of Senior Volunteers, the eight-hour course shared the different ways to reach out to seniors and encourage long-term volunteering.

Asked what he learnt from the workshop, Yun Shan said: “I learned that the elderly might be very talkative and talk about irrelevant points, but we should still respect them and listen to what they are saying.”

THK-BRSAC Manager Loong Lee Lee said that on top of senior volunteers and those from schools who participate on an ad-hoc basis, it helped to have “inter-generational volunteers” like Yun Shan too.

As he prepares to take his Primary School Leaving Examination this year, Yun Shan said he finds it harder to juggle his time between volunteering and revision.

But he does not forget the seniors when he cannot visit them. He goes to the centre’s Facebook page to view photos of them engaged in activities, and “sometimes wish I was there”.

Although he is already starting to help others in a big way, Yun Shan’s ambition when he grows up is also linked to his desire to continue offering a helping hand – he wants to be a lawyer and provide free legal advice.