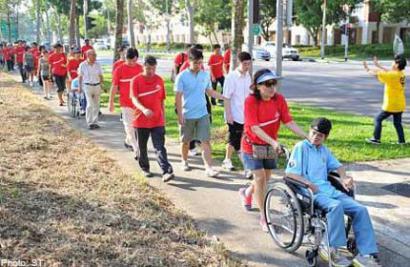 Around 70,000 people took to the streets yesterday for an annual community walk.

In all 87 constituencies across the island, residents walked for 2 to 3km to support various causes and charities.

In Toa Payoh Central, residents and volunteers walked their pets around the estate to support the Save Our Street Dogs group, which raises awareness of stray dogs and canine welfare. They were joined by Defence Minister and Bishan-Toa Payoh GRC Member of Parliament Ng Eng Hen.

The annual event was organised by the People’s Association (PA), community sports clubs and grassroots organisations. PA chief executive Ang Hak Seng said that many residents already participate in its brisk walking groups, and the annual walk grew out of that.

“The diversity in the causes adopted by each constituency… reflects the many ways we can express the core spirit of a compassionate society,” he added. Elderly and wheelchair-bound residents took the spotlight in Yuhua.

A dozen of them walked and chatted with youth volunteers, as well as Minister in the Prime Minister’s Office Grace Fu. Needy residents in Tampines received more than 3,000 cans of food, bought with money raised by the walk. In total, 30 organisations benefited from the day’s events.

They included Swami Home for the elderly and disabled, and women’s advocacy group Aware.