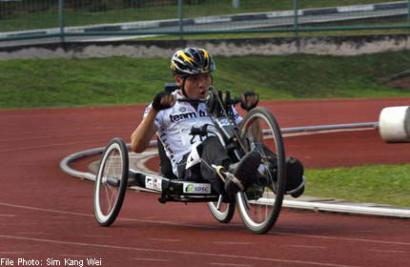 Mr Sim Kang Wei, who was born with cerebral palsy, first tried handcycling at a physiotherapy session four years ago.

He never did any sports and mostly stayed at home then because he has difficulty walking due to his condition.

Now, the 24-year-old is not only a competitive handcyclist, but also helps raise funds for charities such as the Children’s Cancer Foundation whenever he takes part in races.

Last month, Mr Sim, who volunteers with the Asian Women’s Welfare Association, received the Stars of Shine 2013 award in recognition of his efforts.

The National Youth Council award, now in its seventh year, is given to young people aged 15 to 35 who have made outstanding contributions to the community.

Mr Sim, who works as a human resource administrative officer, told The Sunday Times that he hopes winning the award can inspire other young people with special needs to focus on what they can do instead of their limitations.

“I was not an active person, but I stepped forward to try handcycling and it has been a rewarding experience,” he said.

He has taken part in three fund-raising events and two competitions so far.

In 2011, he came in third in the handcycling category of a national track and field meet organised by the Singapore Disability Sports Council.

Mr Sim said his handcycling coach, Mr Foo Fung Liang, 40, made the difference in his development as a person and as an athlete.

Mr Foo, from the Handcycling Association of Singapore, said he believes that sports is the best form of rehabilitation for those with disabilities. “It builds fitness level, and helps to improve confidence and self-esteem.”

Mr Sim is now studying part-time for a counselling degree at UniSIM and hopes to use past life experiences to help the disabled in the future.

“People with disabilities don’t get enough help and support to maximise their potential,” he said.

“I believe my first-hand experience with disability will give me better insights into the kind of help they need.”

His mother, Madam Ivy Lee, said her family is very proud of his achievements.

“We always taught him that if someone helps him, he must be grateful; but even if no one does, nobody owes him anything,” said Madam Lee, 56.

“From a young age, he has been in touch with social workers and counsellors, so he feels that since he has been helped before, he should pay it forward.”