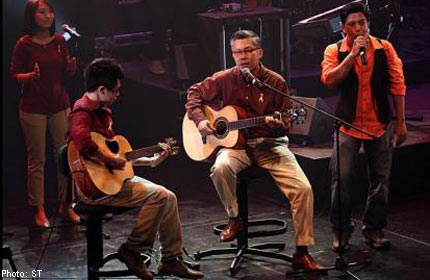 A host of illustrious names in the legal fraternity turned up to wow the audience with their performances.

The backdrop however was not a courtroom, as the likes of Attorney-General Steven Chong and Chief Justice Sundaresh Menon took the stage at the School of the Arts (SOTA) on Thursday night to sing for a good cause.

The Attorney-General played the guitar and sang Stand By Me with three other performers. A children’s group from the Salvation Army partnered the Chief Justice in singing Tie A Yellow Ribbon.

Also among the 70-plus performers was Justice Lai Siu Chiu who sang Memory from the hit musical Cats with two other performers.

A group called The Illegals, led by Senior Counsel Francis Xavier, ended the show on a high with a medley of theme songs from the James Bond movies.

President Tony Tan Keng Yam was the guest of honour at the event, which was also attended by ex-Chief Justices Chan Sek Keong and Yong Pung How.

A total of $303,000 was raised for the bursary, which will be used to train ex-offenders in developing vocational skills.

Co-emcee and lawyer Adrian Tan summed up the jovial mood at the event and quipped: “Show business and legal business – not much difference!”