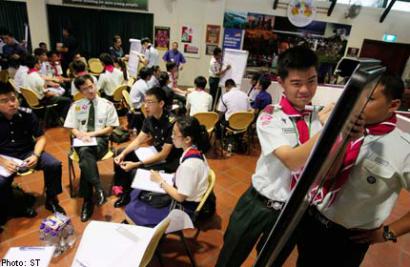 A game-changer for the volunteer youth corps will be its ability to match volunteers more closely with welfare organisations, Education Minister Heng Swee Keat said on Saturday.

Speaking at a Young Leaders’ Forum, Mr Heng said this would both ensure that the help given is relevant and provide mentoring and training to members of the youth corps.

“I (know of) one instance where someone told me, ‘Oh dear, this year the school sent 200 volunteers when I only needed 20. So we ended up having to create work for the 180 people’,” he recounted.

To prevent such instances, the National Youth Council’s new volunteer youth corps – which the council hopes will be 6,000-strong – will have to work out the details on providing the relevant training and ensuring an effective matching system, he added.

About 80 youth leaders from uniformed groups, such as the Scouts, National Civil Defence Cadet Corps (NCDCC) and Red Cross Youth, participated in the forum, which was organised by the Singapore Scout Association.

Other issues such as social entrepreneurship and environment education in schools here were also raised by students.

One of them was 19-year-old Moy Hong, who started volunteering with the NCDCC after graduating from Bowen Secondary three years ago.

While his commitment takes up most of his free time, the third-year Ngee Ann Polytechnic student says he finds satisfaction in seeing cadets mature into responsible young people.

“You give what you can, and don’t expect anything in return,” he said. “That is the true spirit of volunteerism.”