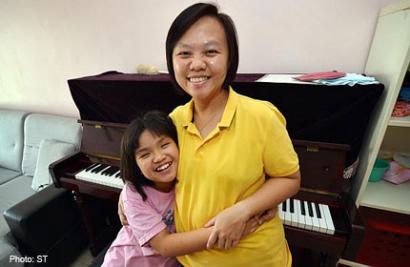 Three times is set to be a charm for 12-year-old Adelyn Koh, the host of this month’s President’s Star Charity.

Adelyn, who is visually handicapped, will return to co-host the annual live TV fund-raiser on Oct 20 – her third turn as mistress of ceremonies since 2011. She will co-host with MediaCorp actress Joanne Peh and TV host Soo Kui Jien.

“I’m not nervous at all. I’m just glad to be doing it again, because the whole point of the President’s Star Charity is to raise funds for the needy and I’m more than happy to be part of this,” she says.

The young musician made headlines last year for selling CDs of her own piano compositions to raise funds for her eye surgery. She was born with Peter’s Anomaly, a rare congenital eye disease that gave her opaque corneas.

She had an artificial corneal transplant on her right eye last November, followed by one on her left in May.

On her eyesight now, she says: “If there’s a triangle, I can pretty much make out that it’s a triangle, but I still have to feel it to be 100 per cent sure.

“Now, I just need to train my eyes and do patch-training, which is where you wear one eye patch to train the nerves of the other eye.”

To be held at MediaCorp’s TV theatre, the President’s Star Charity is an annual live TV show which raises funds through song-and-dance performances.

The show, now in its 20th year, is part of the President’s Challenge umbrella, an annual series of events by various organisations to raise funds for charities chosen by the President.

Donations can be made via the telephone hotline or online (www.sggives. org/psc2013).

The show’s executive producer Julie Sim-Chew says that Adelyn was picked to co-host again because “she did really fantastic for the past two years”.

“Audiences have a connection with her and it’s nice for them to see her grow up as well. Right from the start, she exceeded our expectations. She speaks really well,” adds Ms Sim-Chew.

“Adelyn is the darling of the President’s Star Charity.”

The young host had been a performer on the fund-raising concert too. In 2010, she had played the piano and teamed up with Singapore Idol 3 winner Sezairi Sezali to sing a Mandarin duet – a “very touching segment” that was well received by audiences, says Ms Sim-Chew.

This year’s headline act at the charity show is 1980s pop star Rick Astley, who will belt out three tunes including his best known hit, Never Gonna Give You Up.

Other performances to look out for include a song by 19-year-old Farisha Ishak, winner of Channel 5’s reality singing competition The Final 1, as well as pieces performed by piccolo player Ong Yi Ting and flautist Nikolai Song. Taiwanbased home-grown singer Olivia Ong, 27, will sing her single You And Me.

Lithuanian accordion player Martynas Levickis, 23, who won the second season of Lithuania’s Got Talent in 2010, will also fly in to perform a mash-up of tunes by pop stars Katy Perry and Lady Gaga.

At a press conference on Wednesday, Adelyn wore a white and pink blouse, and carried a Strawberry Shortcake bag.

The young host diplomatically sidesteps questions about which act at the show she is most excited over – saying instead that she liked them all.

Instead, the Primary 6 pupil at Lighthouse School is more relieved that she had finished sitting all her Primary School Leaving Examinations on Tuesday.

“I’m just glad that part is over and I can look forward to doing this,” she says of her upcoming hosting gig.

As for her PSLE results, she says confidently: “I don’t know whether it’ll be very high scores, but I won’t fail.”