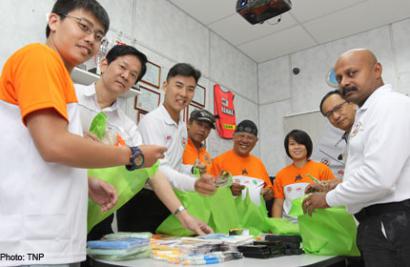 Donating money to charity is easy.

Yesterday, volunteers for the event – a motley crew of bikers from Course Security SG and eight other motorcycle clubs – jointly added yet another feather to their charity cap.

Some 60 bikers completed the charity ride to the Jamiyah Children’s Home (JCH) in conjunction with the Children’s Day Week.

Mr Shaun Neo, 28, organising chairman for WOL 2013, says: “In charity work, you can contribute in many ways other than giving money.

It all depends on the needs of the beneficiaries.”

For the children from JCH – some of whom are orphans or come from abused families – it was a day of fun with bikers, playing futsal, captain’s ball and designing sketch books.

That was in addition to admiring the many motorcycles parked at the home’s Guillemard Crescent premises.

Says volunteer biker Jerry Soh, 57: “It’s the interaction and love that matters for neglected children. These are things that money can’t buy.”

At last year’s WOL 2012, some of the elderly patients from St. Luke’s Hospital just wanted a listening ear because they seldom receive visitors.

Says Mr Soh: “Some told us their life stories.

Others made song requests. It was quite funny because most of us can’t sing.”

WOL, which is in its third year, is sponsored in part by motorcycle accessories and parts distributor Chong Aik International.

WOL 2013 took six months to plan. In the last few weeks, volunteers met every Saturday to pack goodie bags for the JCH beneficiaries.

Says Mr Steven Teh of Chong Aik: “We don’t go out to collect any funds. It’s all personal contributions from bikers and sponsors.

“We want to keep our accounts simple.”

While more can be done by bikers here, perhaps tough regulations involved in fund-raising has caused some bikers to look overseas to extend their charity work.

Says Mr Raguvathi, 50, also a WOL volunteer who has experience in overseas charity work: “Bikers tend to be involved in overseas projects in Malaysia, Thailand and Indonesia simply because the authorities there are more lenient.

“We understand there needs to be transparency in the accounting of funds, yet sometimes it can slow down the momentum of offering much-needed help.”

Online checks reveal that many motorcycle clubs in Singapore are connected to charities overseas.

Yet, the fundamental message should not be lost whether bikers volunteer locally or overseas. “We are bikers and we have hearts, too,” says Mr Soh.