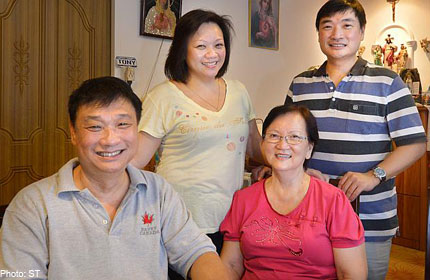 To feed his family, retired businessman Tony Tay has sold all kinds of goods and services, from insurance policies to sewing machines and durians, and run a printing firm.

He is no less committed to feeding the 3,000 needy people served by the Willing Hearts charity he runs, for which he received the President’s Award For Volunteerism last month.

Mr Tay, 66, plans to move the charity from its current site in an industrial building in Genting Lane to larger premises in Jalan Ubi, in order to serve 2,000 more meals a day.

The affable man says he spends up to $300 monthly out of his own pocket, for instance, buying appliances such as rice cookers, for the needy whom he meets.

Explaining his motivation as the founder of Willing Hearts, he says: “Everything in life was given to me, why shouldn’t I give back much?”

Willing Hearts began in 2003 with a mission to give bread to migrant workers.

In his terrace home in Balestier where he lives with his wife Mary Ho, 66, donated bottles of cooking oil, sacks of rice and cartons of body wash are tucked into odd corners.

Eldest child Alphonsus, 44, a health- care professional, says the home is like a “community centre, with people coming and going”.

Ms Ho, who used to run her own logistics company when the children were growing up, recalls that in 2005, her husband also took in homeless people from the downtown Catholic parish where they serve for about six months each time.

Their youngest child, events manager Ann, 38, says she and her brothers were initially worried for their parents’ safety.

“I didn’t understand the impact he had on people until seven years ago. A friend, who at first didn’t know he was my father, said what he did was amazing,” says Ann.

Mr Tay, how did you teach your children the life lessons you learnt?

Mr Tay: I told them about my childhood and let them do chores.

I learnt to sweep the floor at seven, carry night soil to fertilise the garden at eight and iron clothes at nine. It was a charcoal iron, mind you. If you blew in the wrong direction, the clothes got black.

My father left the family when I was about five. A priest referred my sister and me to the Canossian Sisters’ children’s home where we lived for five years. We saw mum during the holidays.

Alphonsus: By six or seven years old, I could boil eggs and make coffee for breakfast for the family.

Ann: Later, when dad was in the printing business, I remember helping to assemble stacks of pink, yellow, white and green slips of paper into receipt books.

How close were you to your children when they were young?

Ms Ho: My husband and I worked late, and my mother-in-law looked after my children.

Ann: Mummy and daddy spent Saturday afternoons and Sundays with us. We camped at Changi Beach when I was in primary school and took walks along the MacRitchie Trail when I was in my teens.

Alphonsus: He was home most evenings after I was 11 years old, and we went out for walks as a family after dinner.

Mr Tay: We had barbecues at home every weekend till they were in their late teens and had their own friends.

What was the naughtiest thing you did as children?

Alphonsus: My brother and I were always up to mischief. Once, when I was around five or six years old, we took some cigarettes from a neighbour’s house. We crawled under the bed and began striking matches to light the cigarettes. My grandmother smelt the burning and caught us under the bed.

Mr Tay: I used my belt on their bums.

Alphonsus: That was enough for us to learn to stay off cigarettes. Other than that time, they didn’t cane us. They just explained.

Mr Tay: If they were just having fun, like one day when they left their sister in a monsoon drain where they were catching fish, I just explained to them that it was dangerous to do that.

If you punish children after they tell you the reason, they won’t tell you anything.

Mr Tay, why did you quit smoking?

Ms Ho: He was in the insurance business, and smoked and drank with clients.

Alphonsus: I must have been around 11 and he was about 33 when he landed in hospital with heartburn.

Mr Tay: I remember Ah Boy (Alphonsus) asking me a couple of weeks after I returned home from hospital, “Do you want to see me go to university?” I threw away the cigarettes and shook hands with him on that agreement.

Alphonsus: I had cut a deal with daddy – I’d study hard if he’d stop smoking.

What is your relationship with your children like now?

Mr Tay: Everybody comes home for dinner on Saturdays. We want the grandchildren to mingle and for all to bond. The person who can’t make it on that day has a Sunday dinner with us.

Ann: He’s a doting grandfather and loves bonding with the grandkids over meals.

Alphonsus: Even now, mummy and daddy always remember to buy my children’s favourite soaps when they shop at the supermarket.

Mr Tay: My grandchildren kiss my wife and me when they come over and cuddle us when they say goodbye.

How have your father’s deeds inspired you?

Ann: I tagged along when my grandma volunteered at an old folks’ home. She cooked for church members. Daddy continued her legacy.

I volunteer to help with event logistics when the need arises.

Alphonsus: Sometimes, I treat clients first and let them pay later. One needy person returned six years later to pay me his fees.

If the parent-child roles were reversed, what would you do differently?

Alphonsus: Sometimes, I wish daddy would take it easier. I wouldn’t have carried loads of vegetables till I had a bad back.

Ann: If I were daddy, I wouldn’t do anything differently because I’d come home feeling happy knowing the number of people I have helped.

Mr Tay: My children were brought up differently from me, so I wouldn’t know how to reverse the situation.