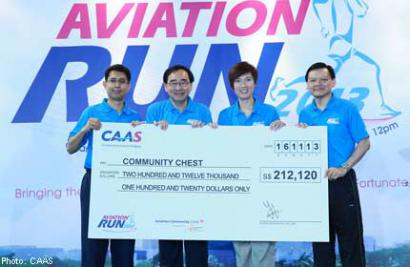 A cheque of over $200,000 raised by the Civil Aviation Authority of Singapore (CAAS) to the less fortunate was presented to chairman of the Community Chest Mr Phillip Tan at the Aviation Run on Saturday morning.

Held at the Changi Exhibition Centre, over 2,000 people participated in the third edition of the run which was flagged off by guest-of-honour, Mrs Josephine Teo, Senior Minister of State for Finance and Transport.

The crowd also came together in a show of unity to attempt the “Largest Human Formation of an Airplane” for the Singapore Book of Records.

Mr Yap Ong Heng, director-general of the CAAS, who presented the cheque to Mr Tan, said the community is wholly committed to giving back to Singapore in various ways. The continued and strong support for the Aviation Run, he added, is testament to the generosity in the community.

Launched in 2011, the Aviation Run is a key event spearheaded by CAAS and under Aviation Community Cares, an initiative which brings the aviation community together to contribute to the society.