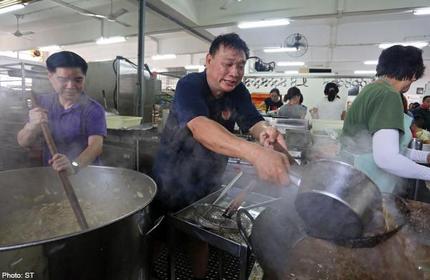 The Willing Hearts kitchen, tucked in a corner of an industrial building in Genting Lane, is a hive of activity.

A row of volunteer chefs cook up a storm in woks double the size of normal ones. Another line of volunteers – many of them students – ladle steaming portions into styrofoam containers.

In the middle of it all is 66-year-old Tony Tay. Every day, the Willing Hearts founder and 200 volunteers prepare 3,000 meals to be distributed to the poor and needy.

“Work? This is not work. Work is stress. Here, I come to see friends and chit-chat. Every day is a day off,” says the retired businessman, despite the long hours.

Mr Tay, who was awarded the President’s Award for Volunteerism last month, starts his day at 4.30am. He leaves around 7pm, after the kitchen is cleaned and food supplies for the next day are prepared. He takes his breakfast, lunch, and sometimes dinner on-site.

Dressed in a T-shirt and shorts, he readily lends a hand wherever it is needed – stirring a wok, loading a trolley – and makes sure the food gets to the right destination out of 38 distribution points, most of them being Housing Board void decks.

There is also the work in organising the charity’s move next year to larger premises in Jalan Ubi, which will allow it to serve 2,000 more meals a day.

The new site will include a medical clinic, dentist and traditional Chinese medicine services. “But nothing is ready,” says Mr Tay during a recent interview. “We are just living from day to day.”

He estimates that the cost of setting up the new location is close to $400,000, including the $150,000 needed to buy five new combi-ovens. His organisation is appealing for donations for the ovens, which will streamline the cooking and allow Willing Hearts to cater for more people.

Mr Tay, who used to run his own insurance business, is sure that many more people would follow in his footsteps if they were aware of the extent to which some may need help.

“Singaporeans are ready to do a lot of work. It’s not that people don’t care – if people know about it, they will do something.”

Still, he does not want the foundation – which he started in 2003 when he, his wife Mary Ho and seven other volunteers began distributing bread to the poor – to grow “too big”, as that would be a sign that the number of people needing their help is increasing.

The voluntary group receives donations of food and money from other organisations and businesses.

What Mr Tay, who has three children and nine grandchildren, hopes to do though is to encourage a revival of the kampung spirit in which the community gets together to reach out to those who need help.

“I was from a poor family, and back then my neighbours would help us. Rich or poor, it didn’t matter,” says Mr Tay who relies on his savings to pay for his living expenses. “If everyone can help just one other person, that would be enough.”

As a child, he and a sister were looked after by the Canossian Sisters for nearly five years, after his father left the family.

“When I was poor, I was helped without any questions asked,” adds Mr Tay, who even after a decade with Willing Hearts, has no plans to call it quits any time soon.