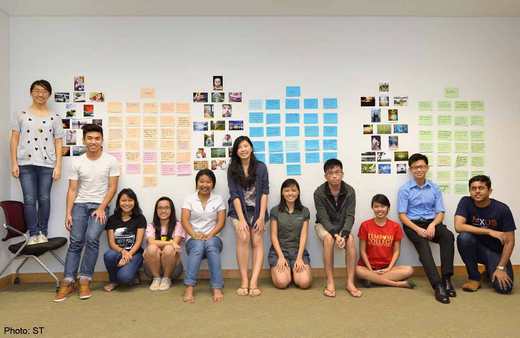 After years of going through the motions on school-initiated projects, Mr Wong Wen Kai, 20, was disillusioned with volunteering.

“We went to a village in China to help the villagers,” he recalls. “But we ended up breaking their one and only water pipe. I was absolutely disillusioned.”

Then his friend, Mr Niraj Mohan, convinced him to give volunteerism another shot.

The pair, along with two other friends, set up Amberbrook, a group dedicated to bringing meaning back to volunteerism.

“Many youths have brilliant ideas and want to undertake a project, but they don’t know how to carry it out,” said Mr Mohan, 20.

He had attempted to organise a charity carnival in his secondary school days but found it a “huge struggle” as he lacked guidance.

This is where Amberbrook comes in.

It runs workshops for volunteer groups, teaching skills such as securing sponsorship but also trying to instil a deeper sense of project ownership.

For example, students tasked to paint the walls of an old folks’ home can also be involved in finding sponsors and choosing paint. “It’s not an ideal situation,” said Mr Wong. “But it’s no longer a one-off project and it improves the quality of the experience.”

He recalled how some of his friends had, like himself, stopped volunteering after they leave school.

“Most don’t have the sense of ownership and the heart of service, and not many people feel the drive,” added Mr Mohan.

That was why they set up Amberbrook in an attempt to “change the youth volunteering ecosystem”.

The group is working with 18 undergraduates going on a community service trip to Myanmar, as well as partnering Broadrick Secondary School on a project for seven classes of Secondary 2 students.

Amberbrook’s young founders are the first to admit that they are no experts in the field and that there has been “a lot of experimenting and trial and error”.

But they feel that their own recent experiences with volunteerism help them to understand what the youth they work with really need.

“We can relate to everyone that we work with,” said Mr Mohan. “We want to make volunteering as enjoyable as possible.”