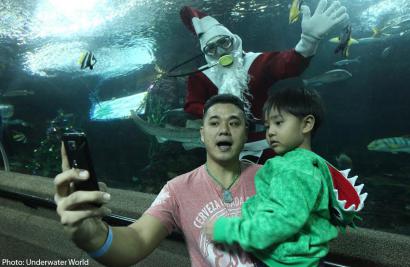 Christmas came early this morning as Underwater World Singapore (UWS) teamed up with 12 volunteers from the Freedom Adventure Club and treated 35 young children with special needs from the Society for the Physically Disabled (SPD) to an exciting, magical, and heart-warming adventure together with their loved ones.

This early celebration was organised in support of inclusion as the world observed the International Day for Persons with Disabilities which fell on December 3. “We share the same belief with the Freedom Adventure Club that people with special needs, especially the children, should live life to the fullest and we hope that the oceanarium adventure at Underwater World Singapore can empower these children and free them to explore and learn about the marvels of the oceans,” said Ms Grace Ng, Deputy Director (Sales & Marketing) of Underwater World Singapore.

The day kick-started with a fun-filled session specially conducted by the Freedom Adventure Club volunteers to help the children get familiarised with the friendly marine animals.

The session was then followed by an educational tour for the children in UWS’ iconic Underwater Tunnel where they enthusiastically pointed and called out their favourites, accurately matching animal for animal.

They also had the opportunity to meet the adorable pink dolphins and fur seals during the Meet-the Pink- Dolphin-and-Fur-Seal session at the UWS’ Dolphin Lagoon. The joyous event reached a climax with UWS’ resident Scuba-diving Santa making a special appearance, feeding sharks and rays and planting smiles on the faces of the little ones all under the tender age of 6.

The tunnel was immediately filled with love as Mr Underwater Santa shared a high-five with the kids from inside the tank among the marine animals.