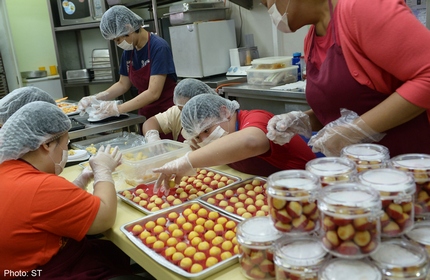 Charities are no longer just relying on traditional handouts by sending out volunteers armed with donation tins or organising flea markets.

Instead, more are earning the funds they need by setting up their own businesses.

Non-profits now run 30 of the more than 80 social enterprises supported by the ComCare Enterprise Fund under the Ministry of Social and Family Development.

Also, of the 153 social enterprises registered with the Social Enterprise Association, 10 have been set up by voluntary welfare organisations.

“They have started to look at social enterprise as an alternative to sustainability and to serve their beneficiaries,” said Mr Alfie Othman, executive director of the association.

As Mr Ngiam Tong Yuen, chairman of ProGuide, said: “Why do we have to ask people for money when we can earn it?” The social enterprise was set up by RSVP Singapore, a non-profit that encourages the elderly to be volunteers.

ProGuide, which provides language training and business consultancy services for government agencies and small and medium- sized enterprises, has an annual turnover of $200,000 to $300,000.

After covering expenses and salaries, the rest of the revenue is channelled to RSVP – enough to fill 15 per cent of its yearly fund- raising target.

Said the non-profit’s founder Tay Lai Hock: “We didn’t want to rely on government handouts but rather be self-sufficient.”

About half of the money needed to operate Ground-Up Initiative, which runs public education programmes, is aimed at building a highly resilient community from the two social enterprises.

Other charities use social enterprises as a way to give those in need a paying job, and at the same time build their skills.

Pertapis, a VWO that provides welfare and educational services, runs four social enterprise schemes to empower beneficiaries. For instance, ex-offenders from its halfway house and female residents from its home are roped in to provide printing, car polishing, home moving and hairdressing services.

The money earned is used to pay their wages and the programmes’ operating expenses.

Mr Abdul Wahab, executive director of Pertapis Education and Welfare Centre, one of the units of Pertapis, said the charity hopes to eventually set up a separate social enterprise when the schemes are more established.

“This is so that if we channel funds to the parent charity, there are clearer accounts,” he said.

When The Straits Times asked the Office of the Commissioner of Charities about this trend, it cautioned charities to be prudent and not expose their assets to significant risk.“It is essential that these business activities do not undermine the charity’s focus and distract the charity from its exclusively charitable purpose,” said the Commissioner of Charities Low Puk Yeong.

Mr Laurence Lien, chief executive of the National Volunteer and Philanthropy Centre, agreed, saying: “It may distract them and even become a liability as some do not have the skills to run businesses.”