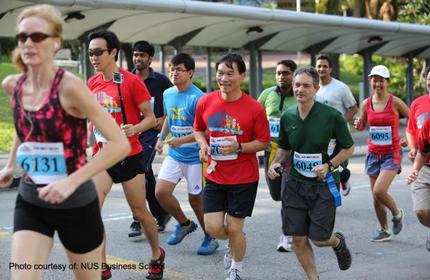 Staff, students, alumni from the National University of Singapore (NUS) Business School, including the Guest of Honour, Mr Yam Ah Mee, took part in a charity run on Saturday, raising some $130,000 for its beneficiaries.

The annual Run, which is also opened to the public, is into its fourth edition this year and is organised by the NUS business school alumni association and NUS Bizad Club.

The money raised will go towards funding student bursaries at NUS Business School and two other beneficiaries – Camp Vision, which reaches out to underprivileged and at-risk youths in Singapore, and women’s shelter Casa Raudha Women Home.

“We chose Camp Vision and Casa Raudha Women Home as this year’s beneficiaries as we believe that women and youth have great potential in motivating and driving change,” said Ms Joey Gan, NUS Business School alumna and Chair of Bizad Charity Run 2014.

The oldest participant, who turns 84 this month, ran 10 kilometres, while the youngest were two nine-year-olds who took part in the 5-km Fun Run.