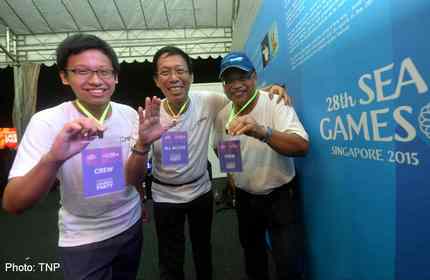 More than a third of the 15,000 volunteers needed for the 2015 SEA Games – the first time in more than two decades that Singapore is hosting the event – have already signed up to help run the biennial sporting extravaganza.

On Saturday, 600 more stepped forward at a launch party at Gardens by the Bay for the June 5-16 Games next year.

More than 9,000 athletes and officials will be at the multi-sport event, to be played out at over 30 venues, including the $1.3 billion Sports Hub which is due for completion in two months’ time.

Acting Minister for Culture, Community and Youth Lawrence Wong said: “Our volunteers are crucial in organising the Games, and creating good experiences for Singaporeans and our guests.

“The response has been overwhelming and I’m very heartened by the groundswell of support.”

Volunteers will be needed in areas from venue support services and logistics operations to roles requiring more specialised skills, such as medical and anti-doping services.

Those interested have to be at least 16 years old to sign up, but younger volunteers are allowed if they are accompanied by an adult.

Interviews will be conducted for some positions that require a higher level of leadership. Training will begin from September, with volunteers going through venue familiarisation early next year.

The technical support officer said: “You see who wins and who loses on TV but when you volunteer, you get to see what goes on behind the scenes and be a part of it.”

Saturday’s launch also saw the unveiling of the official logo, theme and mascot for the SEA Games and the ASEAN Para Games in December 2015.

Earlier on Saturday, the SEA Games Federation agreed to put rowing, petanque, floorball, equestrian, volleyball and boxing up for inclusion next year. This will bring the total number of sports that can be featured at the Singapore SEA Games to 36. An initial list of 30 sports was confirmed earlier last December.

The final line-up is likely to be confirmed at a meeting in April.

Mr Wong, who helped start the countdown to the Games on Saturday with guest of honour, President Tony Tan Keng Yam, called on the public – athlete or not – to have their stake in the event.

He said: “Ultimately, the Games are more than just about sporting events. They are about the hopes and dreams of individuals and communities… (and will) bring together ordinary people with extraordinary dreams.

“Whether the Games can be extraordinary will depend on all of us. We must work together to deliver not just a high-quality Games, but also leave behind a legacy for the future.”