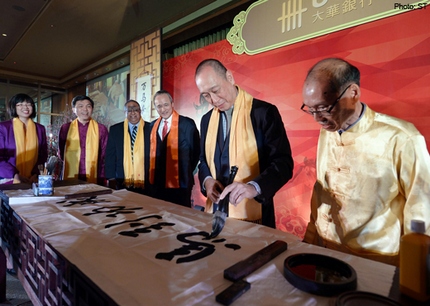 The United Overseas Bank (UOB) raised over $200,000 for charity at its Chinese New Year dinner auction on Tuesdaynight, where the only item up for grabs – a Chinese calligraphy piece – went for $113,000.

Mr and Mrs Derrick Ong of bunkering company Tenshin Chartering were the highest bidders of the night.

UOB made a dollar-for-dollar match, bringing the total amount to $226,000.

The proceeds will be donated to ChildAid, an annual charity concert jointly organised by The Straits Times (ST) and The Business Times (BT).

It will be shared equally between The Straits Times School Pocket Money Fund and The Business Times Budding Artists Fund.

The ST fund provides children from under-privileged homes with pocket money, while the BT fund gives children from low-income families the chance to develop their talents in the arts.

The auction was held during the bank’s Chinese New Year dinner for its commercial banking customers, mainly small and medium- sized enterprises (SMEs), last night at the Ritz-Carlton Hotel.

Following the starting bid of $18,000, the price of the Chinese calligraphy piece rose to over $100,000 in just seven minutes.