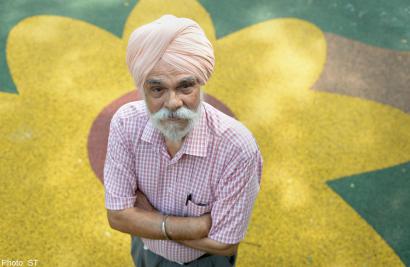 When the boy was 15, his future already looked bleak. He was on probation for shoplifting, his father had a drinking problem and his four unemployed older siblings were not the best role models.

That was in 1974. Today, he lives happily married in Bishan and still keeps in touch with the volunteer who changed his life – Mr Surjan Singh.

When Mr Singh, a volunteer with the then Community Probation Service, first met the boy, he found the youngster his first job as a ship electrician.

“You must get them involved in some useful activity and not let them wander about aimlessly,” Mr Singh said of the way he helped boys stay on the right side of the law.

The retired teacher may now be 82, but that has not stopped him from clocking his 42nd year as a volunteer.

His dedication as one of the longest-serving Volunteer Probation Officers was recognised with a long-service award last night at the inaugural Ministry of Social and Family Development (MSF) Volunteer Awards at the Marina Mandarin Hotel.

He was one of 131 volunteers to be feted. Seven received the Outstanding Volunteer Award. They included Dr Aline Wong, co-founder of Singapore Women’s Initiative for Ageing Successfully; Mr Richard Magnus, chairman of the Public Guardian Board; and Mr Koh Choon Hui, chairman of the Singapore Children’s Society.

Minister for Social and Family Development Chan Chun Sing, who is also Second Minister for Defence, said at the awards that Singapore’s “national soul would be empty” if not for the example set by volunteers.

He added that while Singapore is recognised for its economic achievements, “many people sometimes forget that we have done just as much on the social side”.

More Singaporeans have been giving their time to volunteering. In 2012, a global survey found that 17 per cent did so, up from 8 per cent the year before.

This placed Singapore 64th out of 135 countries in charitable giving.

Few have gone on for as long as Mr Singh, though. Even as he raised three children of his own, he helped nearly 60 boys over the decades, mostly teenagers caught for petty crimes such as theft, keep on the straight and narrow.

During his spare time, he would have long talks with them in the coffee shops near his Serangoon home, and get to know their families.

“Trust is crucial,” he said. “You cannot succeed as a probation officer if they or their parents don’t trust you.”

Asked what kept him going for four decades, Mr Singh said: “I stuck on with this because I believe that human beings are basically good. This is one way I can help in society.”