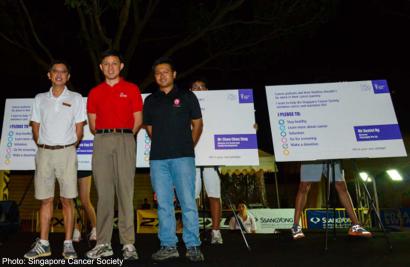 A total of $35,000 was raised by runners and organiser Pink Apple for the Singapore Cancer Society (SCS) at today’s 2XU Compression Run.

The money will be used to fund the society’s services and programmes, said SCS in a statement.

The 42km race drew 25,000 partipants who took to Nicoll Highway for an early flag-off at 4am. The race also had participants aiming to accomplish a 21km and 10km route.

Mr Chan Chun Sing, minister for Social and Family Development, who flagged off the run this morning, also pledged his support towards the fight against cancer.

At the Run, the SCS also launched its Pledge for Life campaign to reach out to more Singaporeans.

SCS, which is marking its 50th anniversary this year, hopes to receive at least 50,000 pledges by the end of the year.