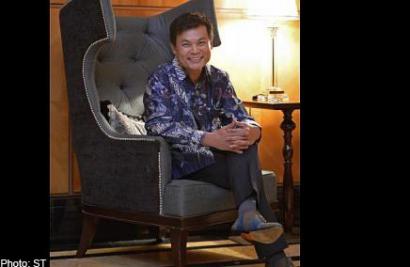 The Singapore Children’s Society raised more than $1.8 million through its 1000 Enterprises for Children-in-Need programme last year – up from $1.6 million the year before and far exceeding its annual target of $1 million.

Out of the 840 donors, almost 600 were companies, such as BusAds, whose director Alvin Yapp helped to raise more than $150,000 through a charity concert.

The money went to the refurbishment of RoundBox youth centre in Toa Payoh and paid for such things as acoustic guitars and breakdance classes for about 650 young people.

The 44-year-old’s charity work was recognised last night at a ceremony at Four Seasons Hotel to mark the fifth year of the 1000 Enterprises programme, where he was also appointed as an ambassador for the society.

As ambassador, he will continue to rally support for the society among his network of business contacts and friends.

Addressing a crowd of 200 owners and representatives of small and medium-sized enterprises and multi-national corporations, Deputy Prime Minister Teo Chee Hean, who was guest of honour, urged the firms to continue to build long-term relationships with welfare organisations and encouraged them to rope in friends, businesses associates and staff to give back to the community.

Said Mr Teo: “The only way a country can grow is if one generation works hard and leaves something for the next.”

The 1000E programme encourages companies to pledge an annual donation to the society. Since its launch in 2009, 1,700 enterprises and entrepreneurs have contributed more than $6.3 million.

There are plans to start a 1000 Philanthropists Programme for individuals and entrepreneurs who have expressed interest to contribute, later this year.

The society reached out to 72,640 beneficiaries last year, providing services such as counselling and after-school care at its 10 service centres here.

Its total expenses came up to more than $12.2 million but it raised $13.72 million from all its donors, giving it a surplus.