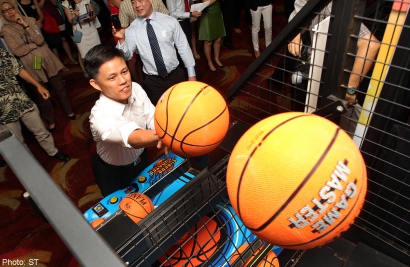 Minister for Social and Family Development Chan Chun Sing showed off an unlikely talent on Thursday… for basketball.

In just 75 seconds, he netted 33 hoops, as part of a HSBC fund-raiser on Thursday night which raised more than $77,000 for The Straits Times School Pocket Money Fund and The Business Times Budding Artists Fund. Almost 650 hoops were scored in total on four arcade basketball machines.

Other players included HSBC Singapore’s group general manager and chief executive officer Guy Harvey-Samuel and Business Times editor Alvin Tay. Every ball that went into the net was worth two points, and each point amounted to a $60 donation from HSBC – enough to support a primary school pupil for a month.

The bank, which was holding its 17th corporate responsibility fund-raiser at Hotel Re! on Thursday night, also donated $300,000 to six charities to fund education programmes for needy children, run by voluntary welfare organisations including the Association for Persons with Special Needs, Lighthouse School and the Society for the Physically Disabled.

Mr Chan also presented appreciation awards to the bank’s outstanding staff volunteers and new volunteer leaders. Among them was Mr Steven Pereira, 43, its most active volunteer who chalked up about 180 hours of volunteer service last year – equal to about three hours of volunteer work a week for the entire year.

The senior vice-president of securities services at the bank, who among other things volunteers on a reading programme for young children, said he gives his time to those in need because he knows he can make a “lasting impact on the lives of others”.

With about 650 staff signing up as new volunteers last year, the bank managed to complete more than 170 community service and environmental projects, or about 20,000 volunteer hours.

In a speech, Mr Harvey-Samuel thanked volunteers for their contributions. He said: “Our staff volunteer programme continues to grow from strength to strength… in a collective effort to help make our community a better place in many ways.”