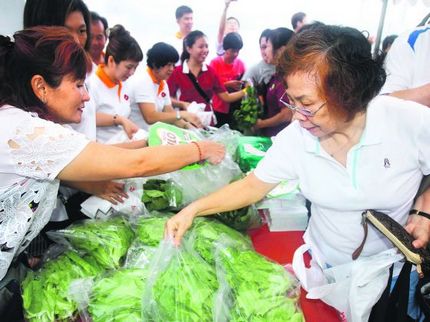 Before her family was resettled from a kampung to a public flat in 1981, Madam Ang Dak Dia grew durians, rambutans and vegetables along the coast of Sembawang where she lived, occasionally selling them at markets to support her six children.

Yesterday, Mdm Ang, 75, once again found herself selling the vegetables she had grown, but this time for a good cause, at the first farmers’ market held for Singapore’s community gardens at Republic Polytechnic.

The vegetables and herbs came from five community gardens within the Sembawang Group Representation Constituency (GRC) and raised close to S$5,900 for the Man Fut Tong Nursing Home, which provides medical, rehabilitative and social care for the elderly.

Community gardens, many of which are run by residents, are set up with support from the National Parks Board (NParks) under the Community in Bloom initiative, and can be found in public and private residential estates, schools and organisations such as hospitals. The NParks’ website said there are more than 600 active gardening groups in Singapore.

Yesterday, the five gardens contributed about 250kg of their harvest, which included vegetables such as lettuce, kailan, chye sim, corn, brinjal and radish, as well as herbs and spices such as chilli and basil. Shoppers could pay any amount they wished.

Mdm Ang, who worked as a cleaner before she retired, said with pride that the produce sold at the market was fresh and free of pesticides.

“Growing vegetables uses some energy, but when you watch the vegetables grow, you will be happy,” said Mdm Ang, who wakes up at 6am every day to tend to community gardens near her home.

Minister of National Development Khaw Boon Wan, who is also Member of Parliament for Sembawang GRC, was the guest of honour at the event. In a blog post on Saturday, Mr Khaw noted how community gardens have thrived over the years.

“I told the AVA (Agri-Food and Veterinary Authority) that we should help those community gardens, which want to increase the yield or ‘professionalise’ their hobby through injecting our expertise,” he said.

This has produced “astonishing results”, he said, adding: “Every four to six weeks, there is so much harvest that the residents have been able to share them with needy families.”

Yesterday’s event was organised as part of the Community Sports Festival by the Sembawang GRC Community Sports Club. The club is looking into organising more of such markets and on a bigger scale, a representative said.