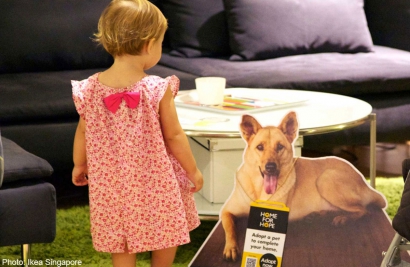 Animal lovers are coming up with more creative ways to raise awareness and funds for charity – from cook-outs for a good cause to cute animal- themed merchandise.

Next month, for instance, Hope Dog Rescue teams up with Klapsons The Boutique Hotel to hold a charity barbecue to raise funds for rescued dog Bruno.

Bruno was found about 21/2 weeks ago in a paint factory, with ticks and wounds around his face and paws. He has been undergoing treatment at the vet’s since the start of this month.

For every ticket bought for the event, $20 will go to Hope Dog Rescue, a group of volunteer animal rescuers.

Klapsons hotel has been holding events almost every month at its sky terrace bar, Fabrika, since June last year. Dubbed Doggy Saturdays, they are held as fund-raisers with animal welfare organisations, including Action for Singapore Dogs.

While it will no longer host Doggy Saturdays, Klapsons will continue to organise ad hoc events for a specific cause.

“When there is a purpose, the response is amazing,” says Ms Anna Tong, 56, Klapsons’ general manager. “I am really touched by the number of people who like animals.”

The animal lover has been supporting organisations such as Hope Dog Rescue in her private capacity. She approached Hope Dog Rescue about the hotel doing its bit to raise funds for Bruno when she heard about his rescue.

They brainstormed and the result is the upcoming charity barbecue. Held at Fabrika from 5 to 8pm on June 14, its tickets are priced at $68 a person, of which $20 will be donated.

Those interested to attend can e-mail Klapsons (info@klapsons.com) or Hope Dog Rescue (fiona@hopedogrescue.org) for tickets. The barbecue is expected to attract up to 120 people and 60 dogs.

Ms Tong hopes the event will be more than a fund-raiser.

“The main part is to let people chill with their pets,” she says. “We live in a fast-paced society and a lot of people don’t sit back and relax.”

The open-air sky bar counts pooches as its regulars after all. Among them is a bulldog which treats the bar as his second home, leading his owner to the lift whenever they turn up for events, says Ms Tong.

Hope Dog Rescue’s founder Fiona Foo says collaborating with Klapsons on the barbecue is a good idea that raises awareness for abandoned dogs.

She considers out-of-the-box fund- raisers an interesting way to reach out to people, and says that it gives those who showed their care and concern a chance to meet Bruno as well.

“If only more people would look at helping animals and giving them a second chance in life,” says Ms Foo, 44, who started Hope Dog Rescue in 2011. “Sometimes, people don’t even give them a second look.”

Hope Dog Rescue is involved in three to five fund-raising events a year. Sometimes, animal-loving groups donate proceeds from smaller-scale events, such as flea markets, to it too.

The fund-raising events it has been involved in raise between a few hundred dollars and $3,000, depending on the scale.

It takes more than good furniture to complete a home: That is the message Home For Hope, an innovative standee campaign initiated by Save Our Street Dogs (SOSD) and Animal Lovers’ League, wants to send to potential animal adopters.

It features life-sized standees of abandoned dogs in Ikea furniture showrooms from the start of this month.

Customers are encouraged to scan the QR codes on these standees, which will take them to a webpage for dog adoption.

The organisers plan to eventually reach out to other furniture boutique stores. So far, it is in talks with five other stores to do so.

Ikea is the first furniture store that agreed to induct the live-sized standees of rescued dogs into their showrooms, says Ms Vanessa Tan, 34, who is the honorary secretary of SOSD.

“Home For Hope widens SOSD’s reach beyond our Facebook fans, of which a majority are already dog owners or people who are unable to adopt dogs for various reasons,” she adds.

The standees, which will be around until June 6, have caught the attention of curious shoppers.

“We’ve seen several of Ikea’s shoppers take interest, scanning the QR codes on the dogs’ collars to find out more,” says a spokesman for Ikea.

“It is early days yet and we are hoping to see more dogs get adopted.”

Animal lovers are optimistic about this campaign as well.

“Although these are just standees, they still make for a pleasant first meeting,” says Ms Phyll Yiap, a senior volunteer at Oasis Second Chance Animal Shelter.

The 22-year-old undergraduate hopes that the standee project will inspire more creative campaigns. “It can sometimes be too noisy and busy during adoptions drives for adopters to get to know the dogs,” she adds.

The founder of Animal Merchandise does so for the love of living creatures: 20 per cent of the home-grown brand’s net profits go to eight animal welfare organisations.

They include the Cat Welfare Society, Society for the Prevention of Cruelty to Animals (SPCA) and Action for Singapore Dogs.

“I knew I wanted to turn my passion for helping animals into my full-time job,” says Ms Sherman, who is from London and has lived here for about 10 years. She started planning the business in late 2012, after spending a decade volunteering at the SPCA.

She says that it is a product of her love for animals, creative design and merchandise.

Animal Merchandise can be found at department stores such as Robinsons and Tangs, alongside leaflets with information on the eight animal shelters it works with. Their prices range from around $7 for fridge magnets to animal-shaped doorstops for about $50.

“Pet lovers love our brand and so do people who don’t have pets but like animal-themed products,” adds Ms Sherman, who has three dogs and two parrots which she adopted.

“People like buying products for themselves, so having an element of giving back makes it a more meaningful purchase.”