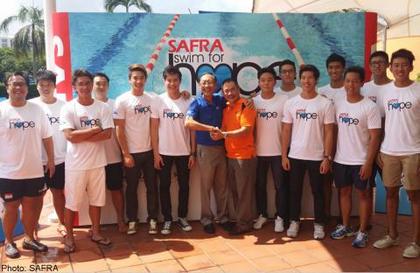 The fourth edition of SAFRA Swim for Hope is set to return on October 12 this year to raise funds for needy NSmen and underprivileged children.

For the first time, the event will be held simultaneously at all five SAFRA clubs island-wide with a bold target to more than double the achievement last year.

The Singapore Swimming Association (SSA) has announced that it will be sending 50 national athletes – including swimmers, divers and water polo players – to swim a total of 5,000 laps at the event.

Every lap swam by participants will contribute $1 to the fund raising effort, which will benefit three adopted charities – the SAF Care Fund, Singapore Children’s Society and Aquatics Heart & Hope.

Some of the athletes such as national swimmer and NSman Russell Ong have volunteered to conduct a series of swim clinics for participants. All fees collected will be fully donated to the fund raising effort.

The athletes will also provide swim tips at a complimentary talk for the first 200 participants who register for the event to aid them in their preparations.

SAFRA Swim for Hope is organised by SAFRA Tampines. Last year, the event raised a total of $20,000 for charity and earned itself a new record in the Singapore Book of Records for the ‘most number of laps swam in six hours’ at one location.