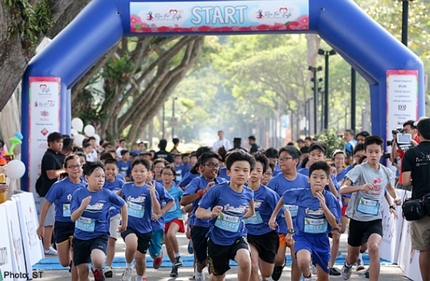 Some 3,800 participants from the local running community; several corporate groups, families and friends came together on an early Saturday morning for a common cause: To raise funds for the under-privileged children and youths via participation in Run For Life 2014 at the Angsana Green at East Coast Park. The event, now in its second year after a successful debut in 2013, has already raised a commendable amount of $600,000. This charity run includes three categories: 10km Competitive Run, 2.4km Family Fun Run and Walk, and a 500m Kids Dash.

Jointly organised by Life Community Services Society (LCSS) and Noel Gifts International, Run For Life was first mooted in 2013 with the primary aim of raising awareness and funds for Life Community Services Society’s programmes. These programmes benefit disadvantaged and at-risk children and youths across all races and religions in Singapore. The event also strives to ingrain values of respect, understanding and acceptance within an inclusive and compassionate society.

Against the backdrop of carnival activities, runners, along with families and friends, participated in an array of exciting games, contests and were treated to high-energy stage performances. The run was a resounding success, with Weldu Desta Fitsun and Mamecha Werkialem Shenu winning the Men’s and Women’s 10-KM category, with a timing of 34:35 and 40:19, respectively. They each walked away with prizes worth $1000.