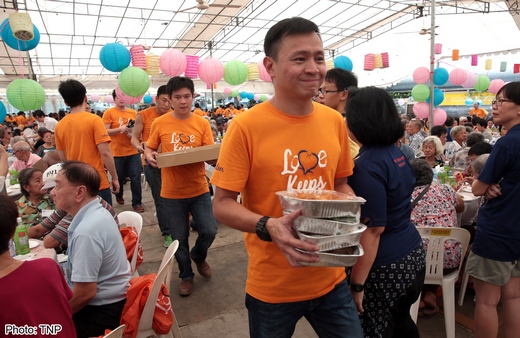 She was the mother in a family of three, living in a rented two-room flat near Macpherson Road.

Money was hard to come by, especially when the only breadwinner in the family was her abusive husband, who she said would often hit her and her daughter.

Mrs Leong, who’s in her 40s, might have given up or she and her daughter might have gone hungry if not for the constant meals, encouragement and support from her benefactor, Mr Tony Tay, the organising chairman of Willing Hearts.

The non-profit organisation was set up to provide for the needy in Singapore by preparing, cooking and distributing daily meals. The two of them had met at the Church of St Stephen, which Mrs Leong attended.

He had heard of her plight and offered to send them food each day.

“He was always a very kind and understanding person who knew what sort of problems we were facing even without asking,” said Mrs Leong.

She would often call him for advice and for encouragement whenever she felt lost.

“Even though I may not see him physically, I know he is only a phone call away. It is so comforting,” said Mrs Leong.

In addition to the food and advice, Mr Tay also arranged tuition services for her daughter, who was taught by tutors volunteering at the organisation.

And he was the person she confided in when she decided to file for a divorce at the beginning of this year.

“When I told him that I wanted to divorce my husband, he wholly supported me till the end of the case,” she said.

Now, Mrs Leong has found a stable job in sales and volunteers at the organisation to repay Mr Tay for the kindness he has shown her.

“All this time, he never gave up on me and always took care of me and my daughter. He helped me too much, I don’t know how I can repay him,” she said.

But not all volunteers were once beneficiaries. Some of them, such as Mrs Eunice Wong, had started serving at the organisation for other reasons.

The 26-year-old had begun serving at the organisation about two years ago after being told about it by a friend.

She had been the youngest volunteer in the organisation at the time she joined.

She is working as a full-time tutor and part-time student studying social work at SIM University.

Besides helping out in the kitchen and with food deliveries, Mrs Wong also tutors some of the younger, schooling beneficiaries on the weekends.

Serving at Willing Hearts has also allowed her to see first-hand the plight that others face every day, such as one time when she had to walk one of the elderly beneficiaries home.

“It was one of my first deliveries and we were bringing food to the beneficiaries at Bukit Ho Swee. There was one lady who couldn’t walk home due to an injury, so I walked her home.”

What she saw next shocked her.”Her flat was so dark and piled full of junk. There were no lights and I saw several cockroaches scuttling around. I didn’t expect to see such a sight in Singapore,” she said.

The joy that she gets from serving the elderly beneficiaries also motivates her greatly. “Some of the beneficiaries are so happy and thankful to us that they hold our hands and hug us for a few seconds when we deliver the food to them,” she said.

The foundation is the philanthropic arm of Heineken in Singapore.”The APB Foundation wants to bring people together, inspire change, and make a difference in their lives,” he said.

This article was published on Sept 9 in The New Paper.