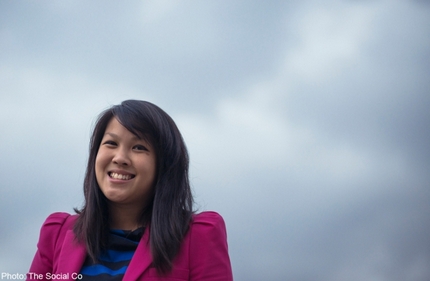 Who says young people care only about themselves?

A group of 50 individuals aged 18 to 34 has set out to debunk the stereotype of apathetic youth with its very own charity drive.

Over the next three months, the group, which calls itself The Social Co, will help raise funds for chosen charities to mark Singapore’s Golden Jubilee.

“As we celebrate Singapore’s 50th birthday, we shouldn’t forget those less fortunate than us,” said Ms Rebekah Lin, 29, the group’s founder, yesterday at the launch of the 50 for 50 charity drive at *Scape. “Through this initiative, we hope to break the stereotype that young people are concerned only about themselves and not others.”

Ms Lin, who is pursuing a PhD in English at Birkbeck, University of London, started The Social Co three months ago after finding that “Singaporean youth possess a lot of creativity and could use that gift to do something good”.

Her group will raise funds through activities like carnivals, cocktail parties, auctions and open-mic nights to help at least 40 lesser-known charities here. Selected charities include Student Advisory Centre, which helps underprivileged kids, and Caregivers Alliance, which supports caregivers of persons with mental illness.

“We hope to raise awareness for charities that people do not know about, charities that are not often in the limelight and have difficulties raising funds on their own,” said 18-year-old social entrepreneur Elijah Ted Ng, the youngest in the group.

Corporate donors will be roped in to match the donations dollar for dollar. The total amount will also be matched by the National Council of Social Service’s Care and Share movement.

“Bigger charities here have the resources to generate publicity and many people know them,” said Ms Tan Li Li, executive director of the Singapore Association for Mental Health, which provides rehabilitative care to persons with mental health conditions.

“Big or small, we are all doing good work. Hopefully… we can piggyback on the creativity of our youth to create awareness for lesser-known charities.”

SingTel is the group’s first corporate sponsor. The Straits Times understands that six other organisations, including banks and small and medium-sized enterprises, will be contributing too.

“It is a good opportunity for our youth to make a difference,” said Mr Chia Boon Chong, associate director of corporate social responsibility at SingTel.