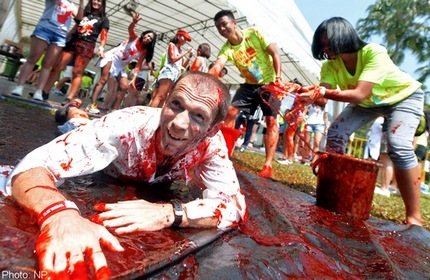 They staggered towards her with ripped clothes and “blood” dripping down their legs.

However, Miss Heng Buck Hong did not flinch at the sight of the “zombies”. Instead, the 56-year-old laughed and even gamely cupped the face of one “zombie” who had tried to scare her.

Miss Heng and 13 other residents of the Singapore Red Cross Home for the Disabled (RCHD) were at West Coast Park on Saturday for the special Walk-and-Wheel segment of the zombie race Run For Your Lives.

RCHD is the sole beneficiary of an online donation drive organised by race organiser Action X.

This is the second time the 5km fun run has been held this year. It was brought back by popular demand and held in conjunction with Halloween.

There were over 5,000 sign-ups this year and participants could choose to be either a survivor or a zombie.

Survivors started the race with three flags strapped to their waist. Their goal was to finish the race with at least one flag while dodging the zombies who would try to snatch the flags.

For their special segment of the race, RCHD residents did not have any flags, but braved the zombies in a customised 1km route while being wheeled by volunteers.

River Valley Primary School student Careis Hung, 10, who was the youngest of the 80 volunteers present, said she enjoyed “volunteering and talking” to the residents during the race.

Like a few other volunteers, she joined in the fun by smearing fake blood all over her neck and face to look like a zombie.

Careis was there with her aunt, administrative executive Carol Tan, who is in her 40s.

“It’s nice to spend time with the residents. I’m glad they had fun despite the warm weather,” Ms Tan said.

The blazing heat, which hit a high of 34 deg C in the afternoon, did not stop participants from enjoying themselves.

Lab technician Teo Yee Ling, 21, said she hoped that maybe next time, the event could be held at night so it would not be so hot.

“It will be more thrilling to have zombies chasing you in the dark,” she said.

Some participants even wore costumes for the race. National University of Singapore student Clement Tan, 24, was decked out in a clown costume, complete with a wig and a fake red nose.

He bought the attire just for this event and took about 30 minutes to finish his makeup.

He said: “It was all in the name of fun. Running in typical sports attire would not be as exciting.”

This article was first published on October 27, 2014 in The New Paper.