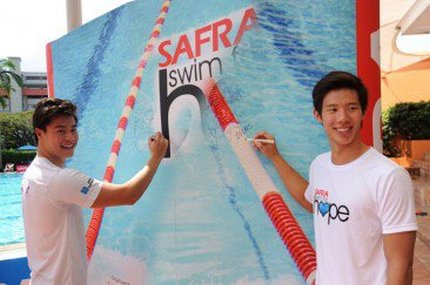 Despite the threat of the haze, a record 1,500 National Servicemen and their families swam more than 70,000 laps for charity on Sunday (Oct 12) at SAFRA’s Swim For Hope charity event.

They raised more than S$75,000, almost four times the amount raised last year, and the organisers are already thinking about how to expand the event next year.

“Some of the ideas they have raised include extending the hours to allow more swimmers to come and join because actually this year, we had to turn away some people who wanted to participate,” said Second Minister for Defence Chan Chun Sing.

“Because of safety reasons and the capacity constraints, we weren’t able to accommodate them. So next year, we can look at how to extend the hours, and we can also look at whether we can extend it beyond some of the swimming pools in the SAFRA clubhouses if we can find suitable partners beyond the SAFRA clubhouses.”

Swimmers raise S$1 for every lap they swim at the event and the money comes from corporate and individual donations. The money will go towards needy NSmen and underprivileged children through three beneficiaries – the SAF Care Fund, Singapore Children’s Society and Aquatics Heart & Hope.

This year’s event drew about 200 naval divers and 50 national athletes, including swimmers and water polo players.

But the one who clocked the highest number of laps was a 40-year-old NSman who swims as a hobby. Vincent Koh swam 342 laps over six hours – breaking his own record of 306 laps last year.

“I want to be able to do better than the year before. I don’t want to always be stagnant at one place. Because I enjoy swimming and I like long-distance swimming, this is one opportunity for me to train as well. It motivates me to train, but it also motivates me to do charity work,” said Mr Koh, who is an intelligence specialist at the Ministry of Defence.

“For training, I would choose to swim in a crowded pool because in an actual Swim For Hope event, it will be a very crowded situation – you have people around you overtaking you, or you yourself are overtaking other people. And there are two styles of swimmers – you’ve got freestyle and you’ve got breaststroke. Those who do breaststroke, naturally they’ll kick you if you come from the back. So you must learn to avoid them,” he added.

“Swimming in a crowded pool during your practice helps you to avoid them and understand their movement. So you will know how to manoeuvre around. If you train in a pool that is like a single lane type, you’ll not be able to do it at the actual race, you’ll suffer and not be able to perform well.”