Non-Governmental Organisations (NGOs) in Singapore can now allocate their limited funds to other meaningful projects, thanks to Google’s offer to defray their online marketing costs with US$10,000 (approximately S$12,800) worth of free advertising credits every month.

Called the Google Ad Grants programme, it is Google’s brand of altruism – similar to AdWords, Google’s online advertising tool – but without the profit margins.

With the free advertising credits, Singapore NGOs can promote their missions and initiatives on Google search using the S$12,800 (approximate) monthly stipend.

Organisations such as the Singapore International Foundation (SIF) will then be able to determine what keywords their target audience will most likely search, ensuring a higher click-through rate to their websites.

Joanna Flint, country director for Google Singapore, said: “Singapore is one of the most connected cities in the world, with nearly 90 per cent of the population accessing the internet.

“Singapore is also a regional hub with many NGOs based here, making it a natural place to launch the programme.”

Through its phone and e-mail support and online resources, Google hopes the programme will make it easier for NGOs to have an online presence. NGOs can then leverage Google’s expertise to optimise and manage their Ad Grants account.

One beneficiary of the Ad Grants programme is SIF’s online platform, Our Better World, which aims to connect communities for good causes through storytelling.

The overall results have been encouraging. “There has been an increase of 70 per cent in visitors to our website from Google Search. Visitors also read 27 per cent more pages and stayed longer by 20 per cent, as compared to the previous average,” added Ms Lim. “We use relevant keywords to direct people to quality stories and ways in which they can become involved and make a real difference.”

The savings accrued from the Google Ad Grants programme, which otherwise would have been an expense, has allowed Our Better World to reallocate the funds to create more meaningful content.

The impact has trickled offline as well, with the NGO recently organising a football tournament for the Singapore Cerebral Palsy (CP) Football team.

“The story of the Singapore CP Football team is one of overcoming disadvantages and disabilities. We found it so inspiring that we decided not only to tell their story, but organise a futsal tournament where teams could interact with them,” said Ms Lim.

Keywords like “CP Football” and “football tournament” were used for the Ad Grant campaign, which helped bring in a third of the total teams participating in the tournament.

“This event gave participants a greater understanding and appreciation of the challenges the CP team faces in playing the beautiful game,” said Ms Lim.

“More importantly, the understanding and awareness that we sought from able-bodied footballers on the difficulties of playing the game for those with CP could not have been achieved without the tournament.” 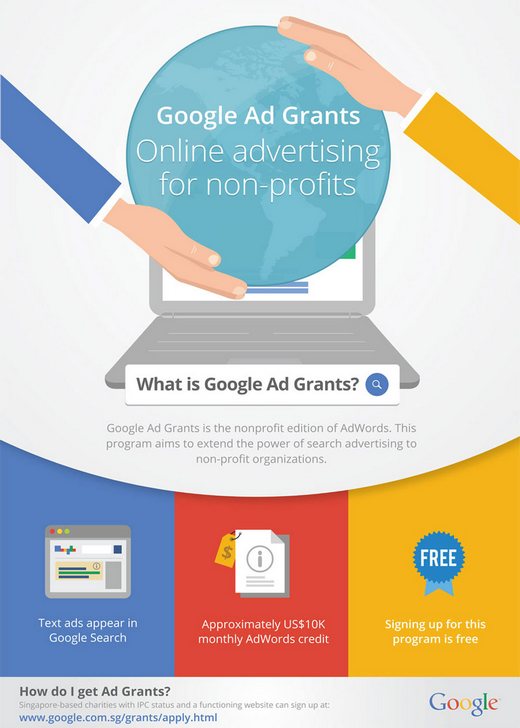 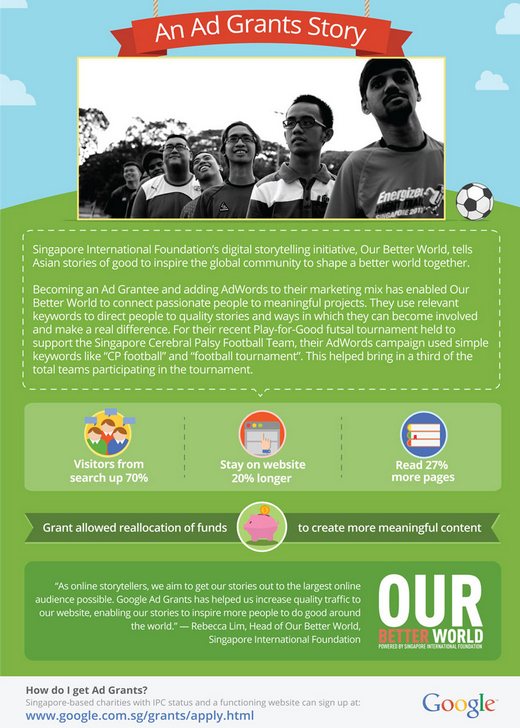