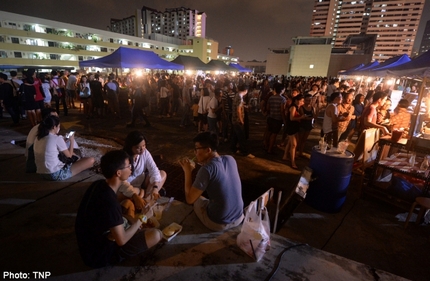 He took a hair-cutting workshop at Jalan Besar Community Club out of boredom months ago.

But Mr Terence Lau, 36, assistant manager at National University of Singapore’s University Cultural Centre, never thought he would one day be cutting hair for strangers.

He said: “Cutting hair is more than just giving someone a haircut. It’s also about having conversations with my customers and listening to their stories.”

And it was for a good cause.

Mr Lau was manning one of 90 booths at The Local People x Movember Night Market, organised by event organiser The Local People (TLP). It took place on Saturday at the fifth and sixth level of the carpark at People’s Park Complex.

The night market is part of a series of events to celebrate Movember, a month-long event every November that encourages men to grow a moustache to raise funds and awareness of men’s health. This is the third time Movember is being held in Singapore.

Saturday’s event was a collaboration between TLP, which regularly organises night markets, and Movember.

TLP co-founder Lu Yawen, 26, said: “The night festival aims to support Singaporeans and local designers. The collaboration happened as Movember is a meaningful cause that TLP believes in.”

At the night market, there were stalls selling jewellery, caricatures and children’s clothes, as well as food stalls selling burgers, milk tea, tacos and cupcakes.

Vendors were encouraged to make a donation from their profits that night to Movember. Customers could also contribute.

Over $900 has been raised so far by TLP at Saturday’s event.

All funds raised as part of the Movember campaign will be used to help fund the Singapore Cancer Society prostate cancer survivorship programmes. To date, over $1 million has been raised.

Mr Lau said: “It’s a different way to raise awareness about issues such as prostate cancer, especially among people in the younger age group who might have not heard about it.”

She said: “The atmosphere and vibe is really contagious. An artsy night market like this is a concept that is not very common in Singapore.”

Ngee Ann Polytechnic student Soon Yu Tong, 19, liked the wide variety of stalls. However, she felt that the place could be better lit. choomf@sph.com.sg

“It was hard to see the merchandise properly. Some stall owners even had to use their mobile phones as torchlights to show customers their items as it was too dark,” she said.

To support Movember, go to sg.movember.com