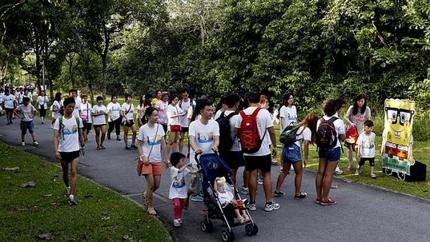 More than 600 participants at a charity walk at Pasir Ris Park on Sunday morning were greeted by smiley yellow standees of Nickelodeon’s cartoon character SpongeBob SquarePants.

There were also inspirational quotes along the 3.5km route to remind participants to have fun and adopt a positive attitude to life.

At the end of the Spongy Charity Walk, held in support of the Cerebral Palsy Alliance Singapore (CPAS), participants were greeted by SpongeBob SquarePants and fellow cartoon character Patrick Star.

The walk was attended by 500 members of the public and beneficiaries from CPAS, as well as volunteers from the labour movement’s youth arm, nEbo, and its sports arm, U Sports.

The walk was organised by NTUC Club, the labour movement’s leisure and entertainment arm. NTUC Club CEO Yeo Khee Leng presented a cheque for $180,000 to CPAS before the walk flag-off.