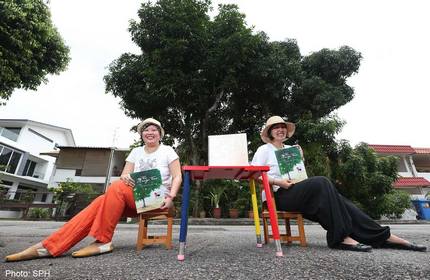 Embossed dots run across the page, showing the outline of a tree. Other dots are arranged in the shape of large water droplets.

The page has little colour but the “illustration” could mean a lot to readers of The Mango Tree, especially as they cannot see.

“It’s a children’s picture book and we wanted the blind children’s reading experience to be as close to that of sighted children as possible,” lawyer Lee Seow Ser, 41, told The Sunday Times.

“If we had more money, we’d have converted the other illustrations into Braille as well.”

The Braille version of the 32-page book has 10 pages, of which only one has illustrations.

In June, Ms Lee and research consultant Hidayah Amin spent about $500 in total of their own money to produce 30 copies of the latter’s book, The Mango Tree, in Braille. They do not know Braille, so they paid the Singapore Association of the Visually Handicapped (SAVH) to do the conversion.

About 15 books have been donated to the National Library Board, SAVH and the Lighthouse School, which provides education to children with visual impairment and other special needs.

As of last month, six other copies had been sold at the cost price of $20 each.

It all started when the duo met in April to discuss what book projects they could work on. Ms Lee, who was on sabbatical leave, had suggested converting Ms Hidayah’s books into Braille.

“We want to have good-quality books that all kids can enjoy, and that should include those who are sighted and those who are not,” said Ms Lee, who has done freelance writing on topics related to parenting. She has two sons aged seven and nine.

Ms Hidayah, who is 42 and single, said: “I worked on a documentary about blind people many years ago. But I never thought of producing books in Braille because I thought there were enough resources for them.”

SAVH’s library has about 1,000 audio books and about 1,000 books in Braille. These include classic fiction for adults and children, but it is rare to have local children’s literature in Braille, as there is not a lot of demand for it.

SAVH has about 150 blind members aged below 18.

The duo decided to start with Ms Hidayah’s The Mango Tree, her first children’s picture book. It was shortlisted for this year’s Singapore Literature Prize in the English non-fiction category. She has written two other English books on Malay culture.

“Children usually like to have something to touch, and for some of them, listening to audio books could put them to sleep,” he said.

“With Braille versions, they also learn how to spell, but with audio books, they may listen to words which sound the same but have very different spellings.”

Ms Lee and Ms Hidayah are planning to produce more of their future books in Braille.

Ms Lee has applied to the Lee Kuan Yew Fund for Bilingualism for her first children’s picture book, and hopes to secure funding to convert that to Braille too.

“If we have books in different languages, we should also have them in a language for the blind,” she said. “Bilingualism should include blind-gualism.”