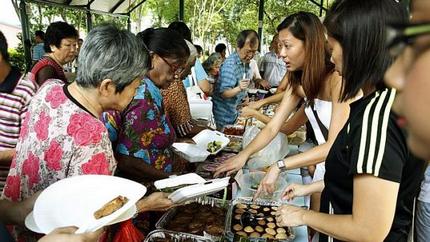 Every few months, Mr Mohammed Nafiz Kamarudin will visit back alleys and collection points for cardboard boxes in Toa Payoh with a few other people.

They are hunting not for boxes, but those who collect them.

Their mission: Invite elderly cardboard collectors to attend, for free, a potluck party that they organise once every two to three months, called Extend the Feast.

“Our mission is to give these old box collectors something to look forward to and smile about,” said Mr Nafiz.

The 33-year-old first-aid trainer is one of the three people who founded the Happy People Helping People Foundation – an informal, non-profit organisation – in June last year. They have organised five of these lunches and parties in the past year. Four were held in Toa Payoh and one in Chai Chee.

The group does not raise money for these events, but instead encourages volunteers to bring food or entertainment, Mr Nafiz said. “Anyone can donate money. But we want people to see for themselves the people who need help. We prefer their participation, (for them) to offer their time and company to the less well-off.”

At a buffet lunch last month at a multi-purpose hall beside Block 15, Toa Payoh Lorong 7, volunteers interacted with box collectors and elderly residents living in rental flats in the neighbourhood.

Volunteers sponsored and set out the lunch with offerings such as fried rice, bee hoon, fish balls and chicken wings. They entertained beneficiaries with magic shows and musical performances. Some even provided free haircuts.

Bags with donated items such as rice, bread, biscuits and soaps were also given out. Mr Nafiz estimates that 300 bags – each with about $20 worth of items – were given out at the event in Toa Payoh last month.

But what the beneficiaries enjoyed the most was the company and cheer of the volunteers.

Madam Aw Su Ting, 77, a box collector, was so touched by the volunteers at the event last month that she was tearing with joy while speaking to them. “I was very touched. I was very happy to be there,” she said in Mandarin.

In its early days, the group also organised flea markets to sell donated items to raise funds for overseas humanitarian missions. But it has since focused increasingly on the poor here.

With nothing more than a Facebook page and word of mouth, the group has garnered a substantial base of support for its activities over the past year.

“For the first Extend the Feast, there were only 10 volunteers. Today, we get at least 60 volunteers,” said Mr Nafiz.

Full-time magician Eugene Chia, 41, who has volunteered at three parties, said: “It’s worth it to see (the beneficiaries) happy, even if it’s just one small moment, because their lives are so hard normally.”

For more information, go to www.facebook.com/HappyPeopleHelpingPeople