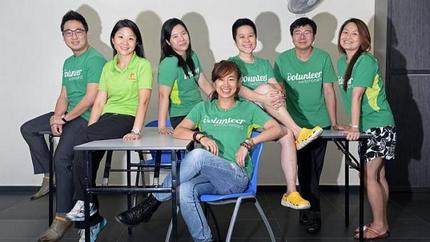 Ms Li Woon Churdboonchart, 37, has knocked on her fair share of doors to distribute food rations to the needy over the years.

Much of what she saw demoralised her. Sometimes she saw stacks of rice and salt packs piled up to the ceiling of a home, simply because the resident does not cook. Or those who receive the food bags would complain about the brands of the donated items.

There are also residents who take the items wordlessly as their children look on.

“While we, as volunteers, gained an almost instant gratification of ‘doing good’, there were occasions that set us thinking if our good intentions had gone bad,” said Ms Churdboonchart, a vice-president in a bank.

So last year, she gathered a few of her friends to give a new spin to the usual food distribution programme, by getting residents who can lend a hand to help and ensuring the donated items are what recipients need. Her team went to Jalan Kukoh, an estate made up mostly of rental flats. Its residents used to be almost all elderly folk but now include a growing number of young families.

They called it Project Home Sweet Home and spread the word that younger residents would get their goodie bags only if they helped to pack and distribute them to the elderly recipients.

This condition was met with much disbelief and scepticism.

“When I asked some of my neighbours to go help out, they said ‘Go for what? They will come to us’,” said resident Siti Noor Aisyah, a housewife in her 20s.

Ms Churdboonchart said many asked why they needed to do something before getting the packs, which contain about $20 worth of items donated by the team or its sponsors.

Only seven of the 30 young families shortlisted to get the goodie bags turned up to help at the first distribution in December last year. The bags were also given to 80 elderly recipients.

“We wanted to change their mindset that though they are on the receiving end, they can still contribute to the community and set a good example for their children,” said Ms Churdboonchart, a Singaporean whose father is Thai.

“In the past, when we gave the bags to the parents, the children were there and they unconsciously picked up the message that it was okay to just keep receiving,” she added.

As the group of 20 volunteers and 20 young residents distributed the packs, they also spoke to the residents to find out if the items in the bag were of use, and who really needed help. “We found out that some don’t use the items because they can’t cook or some didn’t have can openers or the strength to open the canned food,” said games engineer Lee Li Ting, 32, a team member.

So the group customised the goodie bags. For young families, they included more family packs of toothpaste or detergent as there were more people in the household. They packed less rice for the elderly because some do not cook.

As the months go by, the team says it is slowly seeing change in the community. To date, after the 12th monthly distribution, about 20 younger residents have been pitching in.

Some, such as Madam Siti Nurizan, 45, take their children along to help out when the group packs and gives out goodie bags to 160 residents in nine rental blocks.

“They see Mummy do it and they want to follow,” said the housewife, who has two children aged nine and 10.

Jalan Kukoh Residents’ Committee chairman Eunice Goh, 34, said: “At first, I questioned if the concept would work because residents have this mindset after receiving many offers of help over the years. But I am glad we gave it a try as residents are taking the lead now and they come not just because they want the packs but also because it has become a habit.”

For more information, go to http://www.thevolunteerswitchboard.org/our-programmes/project-home-sweet-home/