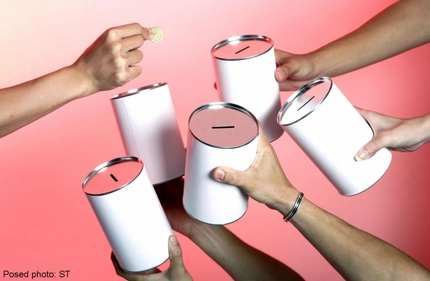 People in Singapore raised less money on this year’s “Giving Tuesday”, a day of giving started in the United States and held here for the second time on Dec 2.

But this year’s Giving Tuesday campaign, which covers the whole of December, collected more money in its first week, over the same duration last year.

Spearheaded by the National Volunteer and Philanthropy Centre (NVPC), the campaign raised $86,397 on Dec 2 on online donation portal SG Gives, the largest such website here serving more than 300 charities.

This is about half the $180,000 raised on Giving Tuesday last year.

Giving Tuesday was launched in the US in 2012 to counter the excessive consumerism of the Black Friday and Cyber Monday sales held on the first Friday and Monday following Thanksgiving. It is held a day after Cyber Monday.

An NVPC spokesman told The Straits Times that last year, seven donors each gave an amount exceeding $10,000, or $115,000 in all, accounting for the bulk of the donations.

She said large donations could still come in, because this year’s campaign “went beyond just contributing back to the community on one day, and focused on giving for the entire month”.

The change in focus also led to several donations coming in after Giving Tuesday itself, she said.

Within the first week of this year’s Giving Tuesday, more than $683,000 was raised on SG Gives, exceeding the $559,282 collected during the same period last year.

These figures do not include donations from some of the campaign’s corporate partners, which may have chosen to channel the proceeds directly to a charity instead of via SG Gives.

The increase in donations for the first week could also be due to publicity efforts starting earlier this year, around October.

Said the NVPC spokesman: “Instead of asking what individuals want to do or give to on Giving Tuesday, we began to ask them what they could give up, prior to Giving Tuesday.”

This was a new aspect of this year’s campaign, in which the organisers challenged people to give up something – such as online shopping for two weeks, or one’s daily cup of coffee for a month – and donate the savings to charity.

Communications consultant Ujwal Sharma, 25, was one of 330 people who made a pledge.

Ms Ujwal, who buys something online about twice a month, decided to give up online shopping, coffee, bubble tea and alcohol for a month – and estimates that she has saved $200.

She donated $50 via SG Gives in mid-December, $40 to a Hindu temple, and has been giving to needy people she meets on the street, such as tissue-sellers.

She said: “We hardly have time to think about these things because we’re so engrossed in work and all. I tend to forget how lucky we are, and how we sometimes spend extra money on random things.”

Meanwhile, the Giving Tuesday campaign goes on, with several food and beverage outlets making a final push for charity.

NVPC hopes to improve on the $4 million raised throughout last December.

For more information, go to www.givingtuesday.sg