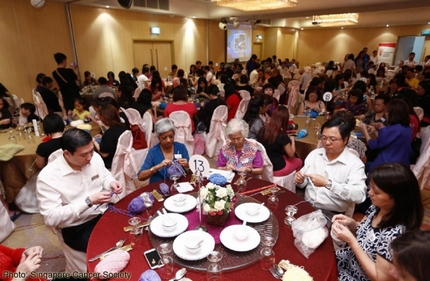 Over 200 volunteers from the Singapore Cancer Society (SCS) gathered to knit hats for cancer patients all over Singapore, in SCS’s Knit for Love project as part of its 50th anniversary celebrations.

The effort also broke a Singapore Book of Records mark for the “most number of people knitting simultaneously”.

A total of 212 volunteers started the record-breaking attempt at 10.30am at the Civil Service Club at Tessensonhn Road, and knitted hats continuously for five minutes to break the existing record, which had involved 170 knitters.

The Knit for Love project was started and driven by cancer survivor and volunteer, Madam Lyn Ee, and supports patients undergoing chemotherapy. The project aims to provide comfort and warmth to cancer patients affected by hair loss from chemotherapy.

This year, the project has committed to knitting and distributing 2,120 hats to cancer patients at the National Cancer Centre, Singapore, National University Cancer Institute, KK Women’s and Children’s Hospital and Changi General Hospital.

Mr Albert Ching, Chief Executive Officer of the Singapore Cancer Society said: “More than just a record-breaking attempt, this significant event is a show of solidarity to those impacted by cancer.”

He added that volunteers had taken the time and effort to join SCS in demonstrating their support for the cancer community.

SCS will also be commemorating the struggles of cancer patients and their families, and mark the efforts by SCS in supporting and helping them over the last 50 years, by organising the Hope 50 – Together as One concert at The Star Performing Arts Centre on Jan 16, 2015.

Members of the public who are interested to show their support to the cancer community can register for their tickets at www.scs50.org.sg. Tickets are limited and priority will be given to cancer patients, survivors and their family members.