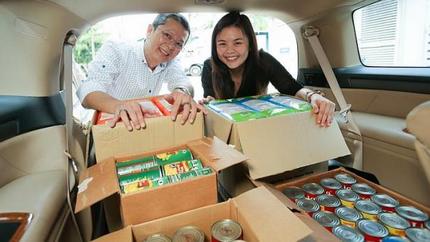 Miss Desiree Yang was an intern at voluntary welfare organisation Beyond Social Services last year when she heard colleagues talking about a mother who mixed condensed milk with water to feed her baby because she could not afford formula milk.

“I wanted to do something about it, but I didn’t know what. So I Googled ‘ideas for social enterprises’ and one of the top results was this new idea of social supermarkets,” she said.

Such supermarkets sell goods rejected by regular supermarkets – for example, goods with damaged packaging or incorrect labelling – to low-income families.

The idea has caught on overseas, with more than 1,000 of these supermarkets in Europe.

Intrigued by the concept, Miss Yang, 20, founded Saltsteps with her father, Mr Roland Yeo, 55, a property agent, in September to do the same in Singapore.

Registered with the Social Enterprise Association in November, Saltsteps collects food and disposable goods that suppliers cannot sell to retailers for reasons such as mislabelling, torn labels, or nearing expiry dates.

It intends to sell these goods to low-income families at discounted rates of 50 per cent to 70 per cent off the retail price. Miss Yang said the profits will go into sustaining the enterprise.

Instead of selling the goods at a physical location, Saltsteps will deliver them to customers living in Lengkok Bahru, Henderson and Bukit Ho Swee, for a start.

So far, it has found two suppliers: S. J. Low Bros & Co, which will supply canned goods such as corn and sardines, and Disposable Soft Goods, which will supply baby diapers. It is looking for more suppliers, particularly those which stock necessities such as rice, oil and formula milk, before it starts sales and delivery.

S. J. Low Bros & Co deputy managing director Zhennan Low said that supermarkets are “very particular” and would return cans with labels that are a little dirty or have small tears.

Goods that are returned may also be newly launched products that did not do well, said Ms Nichol Ng, founder of Food Bank Singapore, which distributes donated food to the needy. “Whatever the reason, the canned goods are still good to eat and are not damaged,” Ms Ng, 36, added.

In any case, Miss Yang said, the group is adopting strict standards. “We collect food that might expire in a year, which is too small a window period for retailers. We also don’t accept anything dented,” she said.

She hopes the provision of cheap groceries can play a part in helping the less privileged stand on their own feet. She said: “It helps to promote a sense of independence, and with time, break the mentality of helplessness and dependence on welfare benefits.”

The service comes as good news to housewife Tan Ing Ing, 39, who lives in a two-room rental flat in Lengkok Bahru. She said in Mandarin: “It’s a service I will use, because anything I can buy cheaper will be of help.”

For more information, go to http://www.saltsteps.com.