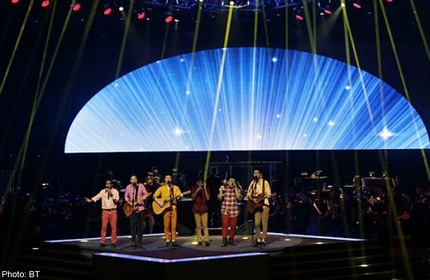 A record sum of $2.327 million was raised at the tenth anniversary, all-stars edition of the annual ChildAid charity concert.

This year’s contribution brings the total sum raised for both funds to over $10 million.

At the opening night of the concert, held on Dec 5 at the Sands Theatre of Marina Bay Sands, audiences were treated to a star-studded lineup, including piano prodigy Abigal Sin and violinist Gabriel Ng, soprano Janani Sridhar and the winner of The Final 1 competition Farisha Ishak.

Mr Alvin Tay, co-organising chairman of ChildAid and editor of The Business Times, said: “This year’s All-Stars Edition promises to be a rare treat as we welcome back on stage several young talents who had performed in previous ChildAid concerts.”

“They have done well for themselves on the international stage. But it’s heartening to note that for some of them, their journey started with ChildAid,” added Mr Tay.

Also in attendance was Minister for Culture, Community and Youth Mr Lawrence Wong, who was a guest guitarist in a group act, where he strummed the chords to Ed Sheeran’s Thinking Out Loud.

“I would like to congratulate ChildAid for 10 wonderful years of bringing love and joy to the less privileged through memorable performances by Singapore’s brightest young talents,” Mr Wong said, adding that “I’m heartened to also see our corporate partners coming forward to give generously and helping to make a difference.”

The concert also honoured its long-time artistic director, the late Iskandar Ismail, who had a hand in shaping ChildAid since 2006.