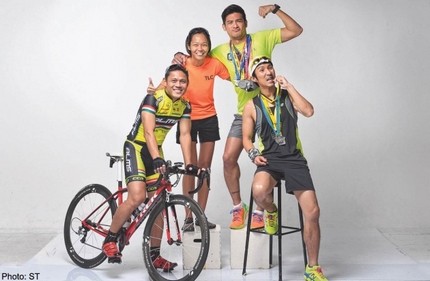 When Ms Liew Wei Yong braved freezing temperatures to run across glaciers in Iceland last year, she was not fuelled by the desire to win or set a record.

What kept her going was in part Beautiful People, a volunteer work programme that helps teenage girls on probation reintegrate back into society.

Ms Liew, 34, who completed a 250km stage race in the Gobi Desert in China in 2009, had collected over $10,000 for a teenage shelter here in 2010 when she attempted an ultramarathon across the Sahara

Desert. While she did not complete the Iceland run as she fell and hurt her knees, she still raised $4,000.

“It was a personal challenge to complete the ultra-marathons, and it is even more meaningful and memorable when the runs were intended for a good cause,” said the fitness coach and founder of Train Live Compete.

Like Ms Liew, more people in Singapore are working up a sweat for charity.

Over at online donation and fund-raising website GIVEasia, used mainly by Singapore residents, about 700 of its 1,000 people who had raised funds for charity via the website this year did so through sports.

This is an increase from an estimated 450 to 600 people a year since the website started in 2010.

He said the rise could be a result of how online sites have made fund-raising simpler.

“In the past, fund-raisers were burdened with tasks like collecting cash donations and facilitating bank transfers from donors to beneficiaries. There was also the trust issue that they needed to handle with donors,” he added.

Since its start, the website has collected about $5.8 million for 170 local charities here.

The Singapore Cancer Society has its own Charity Athletes programme, where volunteers undertake to collect donations each time they sign up for a run. They have about 20 regular volunteers, said its manager Patrick Neo, and they have raised about $20,000 for the society this year.

Some also rope in their friends. Actor and host Randall Tan, 41, for example, founded running group Yellow Fellows last year. It has raised more than $6,000 for Singapore Cancer Society by running 13 races this year.

“I lost my uncle to cancer in January this year. It was painful for everyone in the family to watch him suffer.

“I have no idea what I could have done to help him. But through running, I am able to help raise funds for cancer research, to help cancer survivors and their families,” he said.

Likewise, Mr Eugene Lim, 34, and his friends formed The High Panters running group in 2012, and have helped raise more than $6,000 for Hope for the Family in Thailand, which provides basic schooling to children at risk.

“There are so many charity drives these days that people are constantly being asked to donate.

However, I feel that no sum is too small,” said Mr Lim, head of marketing and PR at Goodvine Group.

Not all run to raise funds. Some – like former national sprinter Hamkah Afik – cycle too.

Last month, Mr Hamkah and his group, ALMS Cycling Team, rode for up to 250km in the Punggol- Seletar region, to raise money for the Children’s Cancer Foundation.

Said Mr Hamkah, 42, a library assistant: “I am so glad to accomplish my mission. The last 30km ride was very tough.”

As Mr Aseem said: “There are few things in life that are as enjoyable and satisfying as helping someone in need.”