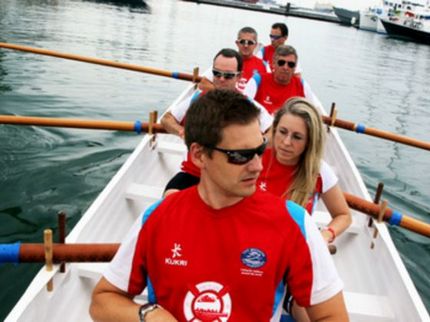 It is a 140km clockwise journey around the Singapore coastline that 40 people have pledged to row in the name of charity.

Come 10am on April 22, a final group of 32 rowers will set off from the waters at VivoCity for Mission Row Around Singapore Island (RASI) to raise funds for global maritime welfare charity the Mission to Seafarers.

They will make their way in two replica 19th century Cornish pilot boats, which had cost S$26,000 each to build, and with the journey expected to take an entire day, each rower will take turns to do two-hour shifts.

Several corporate organisations, such as Norton Rose Fulbright, have come on board to fund this event, and the Republic of Singapore Yacht Club is providing the team with storage and training facilities.

“Every member of the project puts in at least S$888 and we have eight seed sponsors contributing at least S$5,000 each,” said Iain Anderson, a partner at Reynolds Porter Chamberlain.

“The work of seafarers touches our customers, so we decided to do something different and push ourselves to raise money for the Mission.”

So far, S$160,000 has been raised for the charity and Lee Wai Pong, branch chairman of the Mission to Seafarers in Singapore, is hopeful that Mission RASI can raise a total of S$750,000 as they continue to reach out to corporate organisations and their regional branches to support them.

“It’s a collective effort with the core spiralling out of Singapore, although we are getting corporate organisations on board at the same time,” said Lee, a former seafarer.

“On event day, there will be concurrent events held in various parts of the world similarly to raise funds for the cause.”

“This is a milestone event and has never been attempted before. It strengthens the ethos of giving and I’m heartened by the volunteers who are taking time to do this. The spirit of kindness and giving will go a long way to providing the base funds for RASI,” he added.

A local sports charity is also set to benefit from Mission RASI, as the boats will be given to them to help them introduce rowing to youths.

“It’s not a one-off investment because we have a legacy initiative so underprivileged Singapore youth can get introduced to rowing,” said Anderson.