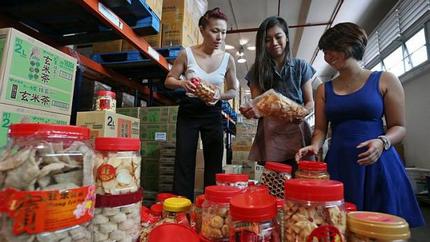 In about a month, more than 1,500 tins of festive goodies have been donated to Food Bank Singapore, a charity which distributes food to the needy.

The most common items given up were cookies and tarts. People seemed more inclined to keep bak kwa (barbecued pork) for themselves.

And though the festive period ends today, Food Bank co-founder Nichol Ng told The Straits Times: “As long as the goodies are not opened and not expired, we will accept them even after CNY is over.”

Mr Dennis Tong, operations manager of Bright Hill Evergreen Home, said: “The festive snacks can be used during tea breaks for our elderly residents or used as prizes during activities and games that we organise.”

Most of the snacks have already been distributed to the 137 help groups that the charity partners. The help groups include children’s homes and family service centres.

And if there are unwanted festive goodies, Ms Ng said, these could go to animal farms, where the food can be converted into ingredients used for animal feed.

This is done in countries such as Britain. All this helps to reduce food waste – the main reason Food Bank started the donation drive.

The situation gets worse during festive seasons, when there is typically a 30 per cent spike in food waste, noted Mr Kavickumar Muruganathan, lead environmental engineer at Singapore Environment Council.

The society’s president, Ms Jane Tan, said: “Having such goodies helps our beneficiaries get into the festive mood and be happy.”

She said: “During CNY, people exchange gifts and tend to give more, then we have more than what we need. It’s nice to be able to share our surplus food with the less privileged.”

Encouraged by the good response to its latest effort, the Food Bank is considering similar projects for other festive occasions such as Hari Raya and Christmas.