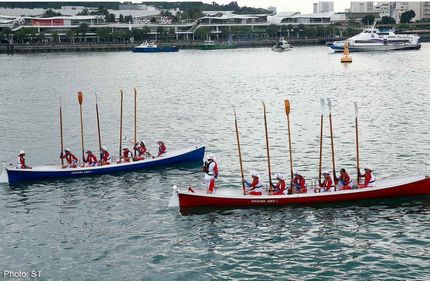 They battled through storms, heat and rough waves.

They had barely enough sleep and were physically and mentally exhausted.

But for the 32 rowers who took part in Mission Row Around Singapore Island 2015, it was all worth it.

The 24-hour charity rowing expedition has so far raised $500,000 of its $750,000 target for the Mission to Seafarers charity, which helps sailors who face loneliness and personal problems in their months away at sea.

The 140km journey around the island – the first such charity event – began at 11am on Wednesday.

Two Cornish pilot gigs, each with six rowers and a coxswain, were used, with rowers assigned shifts of two hours. When they were not rowing, they rested in a flotilla accompanying the boats.

Rough waves and strong winds were among their early problems.

“We had very, very choppy waters and wind against us that were very challenging,” said 42-year-old maritime lawyer Iain Anderson. “You’re rocking all the time and it’s hard to keep your oars in the water.”

However, the biggest obstacle came about nine hours into their journey.

“We had a big electrical storm,” said 57-year-old dietitian Alison Carpenter, the oldest rower in the team. “That was extremely frightening. Our boats filled up with about 50-60cm of water.”

For safety reasons, the rowers got out of their boats and sought shelter in the support vessels until the weather cleared. “I almost fell asleep at the oar,” said insurance broker Lewis Hart, 45. “But we rallied together and it was absolutely fantastic. It’s such a good cause.”

They completed their journey around 11.40am yesterday.

Fund-raising efforts will continue until May 9.

Following the success of this event, plans for a similar charity expedition in 2017 are under way.

The Mission to Seafarers provides practical and emotional support to sailors from all over the world.

The president of its Singapore arm, Mr Lee Wai Pong, 59, said: “(Our help is) extended to all seafarers, irrespective of their race or religion.”