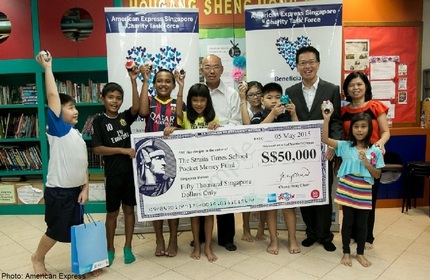 The multinational financial services corporation had pledged since January 50 cents to SPMF, up to a total of S$50,000 whenever card members shared their “Member Since Year” through a Facebook App (www.amex90.sg).

Singapore Country Manager Mr Cheng Heng Chew was part of the contingent that helped each child to decorate a piggy bank as a visual representation of their saving goals.

“We are gratified to be the beneficiary of this special 90th-anniversary charity project and are thankful that American Express has taken the time to raise awareness of our mission to create a better future for the underprivileged children we help,” said Mr Han.