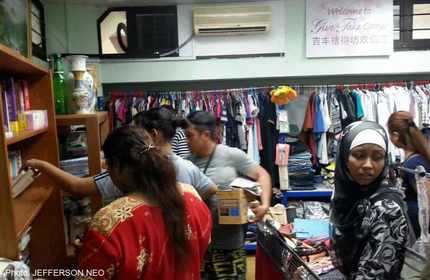 Keat Hong residents have been dropping off unused household items, to be given to needy neighbours, at their residents’ committees. Underprivileged families then pick them up from a newly set-up corner in Keat Hong Shopping Centre in Chua Chu Kang, run by volunteers.

So far, more than 1,000 items, including household appliances, toys and books have been donated at eight residents’ committee collection points in the area under the “Give and Take@Keat Hong” initiative.

One in five of the donated items has already been taken.

Programme organiser Jefferson Neo, who is also the chairman of the Keat Hong Citizens’ Consultative Committee, said a team of 20 committee members and resident volunteers came up with the idea for the programme last year.

The estate is home to at least 150 financially strapped families, who hope for items such as sofas and refrigerators.

“We spoke with needy families and better understood their needs after doing home visits. So, we came up with this idea and shared it with other residents, and they gave us their support,” said Mr Neo.

In fact, the volunteers were almost overwhelmed by the generosity. “We were surprised by the volume of donated items, and we now have to look for storage space near the shopping centre,” said Mr Neo.

The drive also helps reduce wastage. “Instead of throwing out good products such as travel bags, storybooks, shoes, clothes and mattresses, we can give them a new home,” he added.

Among the beneficiaries of the initiative is Ms Gayathiri Kaniesen, 29, a document controller. She picked up a set of plates and cups, and storybooks for her four-year-old daughter.

“The programme is beneficial because we would not be able to afford these things otherwise. I’m thinking of giving back as well, and passing on some of my unused clothes,” she said.

Mr Neo, who has been volunteering in his estate for the past 15 years, said he hopes the programme can be expanded to other neighbourhoods.

“It’s a good way to encourage self-help, and build up the kampung spirit,” he said.

Both the drop-off and pick-up points are open on weekdays from 8am to 10pm.