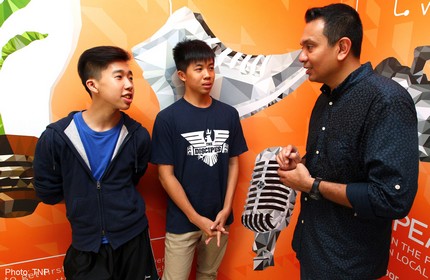 Its focus has been on developing the youth in areas such as music, media and dance.

“I feel youths now are becoming more community-minded and interested in civil discourse,” said Mr Pragasam, 42, who has been heading *Scape since Jan 1.

Mr Pragasam said that during the week of national mourning for the late Mr Lee Kuan Yew, he observed young people distributing water and umbrellas to thousands of people who were queueing to pay their respects at the Parliament House.

Many also approached *Scape to initiate fund-raising activities to help survivors in Nepal after the recent earthquake.

Want to do more

He believes young Singaporeans want to get more involved in contributing towards the local community.

He hopes *Scape can link these passionate young people with more structured volunteering programmes like the Youth Corps Singapore, which is under the National Youth Council.

He added that *Scape has a board of members who are also ready to mentor and guide them.

“We want to encourage personal development and self-discovery in youths, which includes helping them give back to the society in their own diverse ways,” Mr Pragasam said.

*Scape has been known to be a hub for youth culture, where young people can engage in activities such as dance, music and entrepreneurship.

Its tenants, which include a good mix of retail and food and beverage shops, are also meant to appeal to the young.

Still, its monthly footfall of 440,000 is less than that at other malls, which can be more than a million, reported The Straits Times in March.

It is hoped that the YouTube FanFest, to be held this month at *Scape, will draw the crowds.

It will bring together well-known international and local YouTube stars, including Wong Fu Productions, Wah! Banana and Tosh Rock for a massive fan meet.