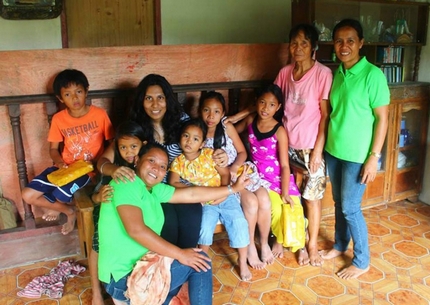 Business Management student Manorama Singh was initially apprehensive about carrying out overseas fund-raising projects as she thought they would “eventually be unsustainable as one-off projects”.

However, Ms Singh, who is in her final year at the Singapore Management University (SMU), changed her mind when she chanced upon a recruitment drive for Project Luminaire 2 in school in 2013.

The overseas community service project had a mission to light up households in Balunos village in the Philippines with solar-powered light made from recycled bottles. Since the project was in its second phase, and focused on sustainability, she decided to be part of it.

With the help of the Singapore Red Cross Society, Youth Expedition Project and a three-day fund-raising campaign in SMU to sell cupcakes and Costa Coffee vouchers, the 22-year-old helped to raise $28,000. The money went towards providing 180 night lights to households in the village and rebuilding the roof of Balunos elementary school which was damaged by Typhoon Haiyan.

Said Ms Singh: “My biggest takeaway from the trip was the overwhelmingly warm feeling that I experienced as I handed over the bottle of light to nai-nai (grandmother in Tagalog). She showered me with kisses and told me how she no longer fears falling down at night as she had lived alone in a house on a hill with no electricity.”

It was then that Ms Singh realised that there are many people around the world who struggle with basic necessities and “the value of service shouldn’t be dictated by geographical boundaries”, as she had previously thought.

Hence, she decided to pursue her fund-raising efforts in Varanasi. “I visit the city yearly as I have some relatives living there. I’ve observed the difficulties faced by the financially-disadvantaged and so I thought, ‘why not do something in a place I’m familiar with?’,” said Ms Singh, who went on a 22-day trip to the Indian city last December, where she visited the Little Stars School.

She spoke to the locals there and realised that the school, which provides free education to over 600 children who live in the slums of Nagwa, needed electricity and medical and social support.

By launching an online crowdfunding campaign on Indiegogo called Project Roshni and setting up a Facebook page, she made it her goal to raise $15,000 to install solar panels on the school’s roof and construct two rooms for volunteer doctors and social workers to provide medical and social support for the students.

While she feels that it’s normal for people to have thoughts like “A project in India? How sure can I be that my donation is not going into the wrong hands?” or “A university student is heading this project… how credible can this be?”, she remains undaunted.

She feels that making a trip to the school herself and working alongside the management has allowed donors to know that proper checks have been carried out to ensure that the overseas partners are credible and are doing the best they can for the children.

Ms Singh, who will be going back to the school in December to help in the construction of the solar panels and rooms, said: “My parents and friends have been extremely supportive of my efforts. My professors and SMU’s Centre 4 Social Responsibility have directed me to relevant contacts, contributing to the cause and cheering me on from the start.”

On future fund-raising plans, Ms Singh said: “I have considered raising money to provide scholarship opportunities for the brightest students in the school so they can further their education and go to universities. But that is something that is still in the planning stage.”